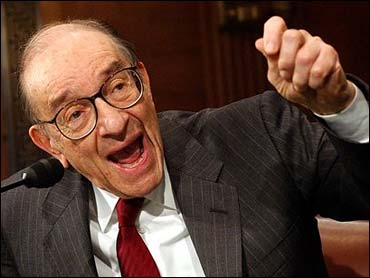 The Federal Reserve, caught between a sudden economic slowdown and heightened worries about inflation, decided to nudge a key interest rate up by another quarter-point on Tuesday.

The move, which had been widely expected by financial markets, pushed the federal funds rate up to 3 percent. It was the eighth increase in the interest that banks charge each other on overnight loans since the central bank began its credit tightening campaign last June.

The Fed also retained a promise it has been making for the past year to move rates up "at a pace that is likely to be measured," a phrase that markets have interpreted as signaling continued small quarter-point rate increases.

CBS News Correspondent Howard Arenstein reports that the fed says inflation can be kept in check so it expects that it will be able to continue raising rates at what it calls a measured pace. The fed also blames higher energy prices on slowed spending.

The Fed in its statement said, "Recent data suggest that the solid pace of spending growth has slowed somewhat, partly in response to the earlier increases in energy prices."

The Fed also noted rising prices, saying "Pressures on inflation have picked up in recent months and pricing power is more evident."

The decision by Federal Reserve Chairman Alan Greenspan and his colleagues came as the central bank is being buffeted by strong economic crosscurrents — rising inflation pressures on one hand and a sudden slowing in economic growth on the other.

It was widely expected that faced with those conflicting forces, the Fed would stay the course, raising interest rates by another moderate quater-point in an effort to keep inflation pressures from this year's spurt in oil prices from spilling into other sectors of the economy.

When the Fed started boosting rates 10 months ago, the funds rate stood at 1 percent, the lowest level in 46 years.

The increase in the funds rate was expected to trigger a corresponding quarter-point increase in banks' prime lending rate, the benchmark for millions of business and consumer loans. The prime rate now stands at 5.75 percent.

"There is certainly not going to be any surprise in their action. Every indication is that the Fed will hike the federal funds target by another quarter-point," said David Jones, head of DMJ Advisors.

The steady-as-she-goes prediction is a far cry from the expectations about the Fed's next moves that were being made immediately after its last meeting on March 22.

At that time, Wall Street began bracing for the Fed to ditch the promise to be measured and jack up rates by a half-point. That fear of more aggressive Fed credit-tightening was fanned by a change of wording in the March Fed statement to acknowledge more worries about inflation.

Since then, however, various indicators showed the economy slowing sharply in March. The government reported last week that this sudden slowdown had dragged down economic growth to a rate of just 3.1 percent in the first three months of the year, the slowest pace in two years.

That slowdown has eased fears for the time being about the Fed becoming more aggressive in its rate hikes. Analysts, however, are not looking for a pause in the gradual quarter-point increases because various inflation statistics are continuing to flash some warning signals.

Consumer prices jumped 0.6 percent, reflecting the surge in energy costs, but even outside of volatile food and energy, the so-called core rate of inflation was up 0.4 percent in March, the biggest jump in 2½ years.

"The pace of inflation is still moderate, but it is not as moderate as it once was," said David Wyss, chief economist at Standard & Poor's in New York.

Wyss predicted that the Fed will keep raising the funds rate for the rest of the year, leaving it at 4.25 percent at the last meeting in December, a point where the central bank will feel the funds rate is now at neutral, neither so low as to stimulate economic growth or so high as to depress economic activity.

"I think Greenspan would like to get back to neutral before he leaves the Fed," Wyss said.

Greenspan, who is in his 18th year as Fed chairman, has said he will step down when his term on the board ends in January 2006. December is expected to be his last meeting.

Long-term interest rates have also swung this year in response to the crosscurrents in economic forces. The benchmark 10-year Treasury note, which rose to 4.63 percent after the Fed's March meeting because of the central bank's inflation worries, dipped to 4.19 percent on Monday, reflecting the string of statistics pointing to weaker economic growth.

Because of this decline, analysts believe that mortgage rates, which reflect market forces, are not likely to rise very quickly this year. The 30-year mortgage, which fell to 5.78 percent last week, should rise to only 6.25 percent to 6.5 percent by the end of this year, Jones predicted.