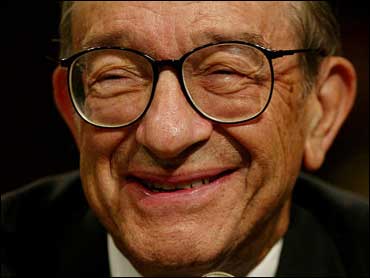 Data for May suggest the economy has "stabilized," he told a conference of top central bankers in Berlin.

"The acceleration has not yet begun," he said, but he went on to note that recovering stock markets and other indications "are suggestive of a fairly marked turnaround."

Recent productivity gains and the impact of a U.S. tax cut taking effect July 1 will likely boost consumer spending and feed into the job market, Greenspan said, though he also injected some caution into his remarks.

"We are stabilizing and there is some indication of return, but it's not at this stage by any means clear," he said, addressing the conference via audio link.

Greenspan renewed his previous assessment that deflation is a remote threat.

"All in all, we're looking at a low-probability event," he said. "But if it happens, our concerns are such that it could be a significant event that would require insurance against."

Earlier, the head of the European Central Bank — speaking two days before a decision on whether to cut interest rates — said Europe's economic growth remained weak in the first half of the year and forecast that inflation will stay subdued in the next few months.

But ECB president Wim Duisenberg also suggested that the low cost of borrowing is already helping European companies recover and predicted improved growth for the second half of the year.

The ECB is widely expected to cut interest rates by as much as half a percentage point Thursday to spur growth in Europe, though Duisenberg gave no clear signal in his conference remarks.