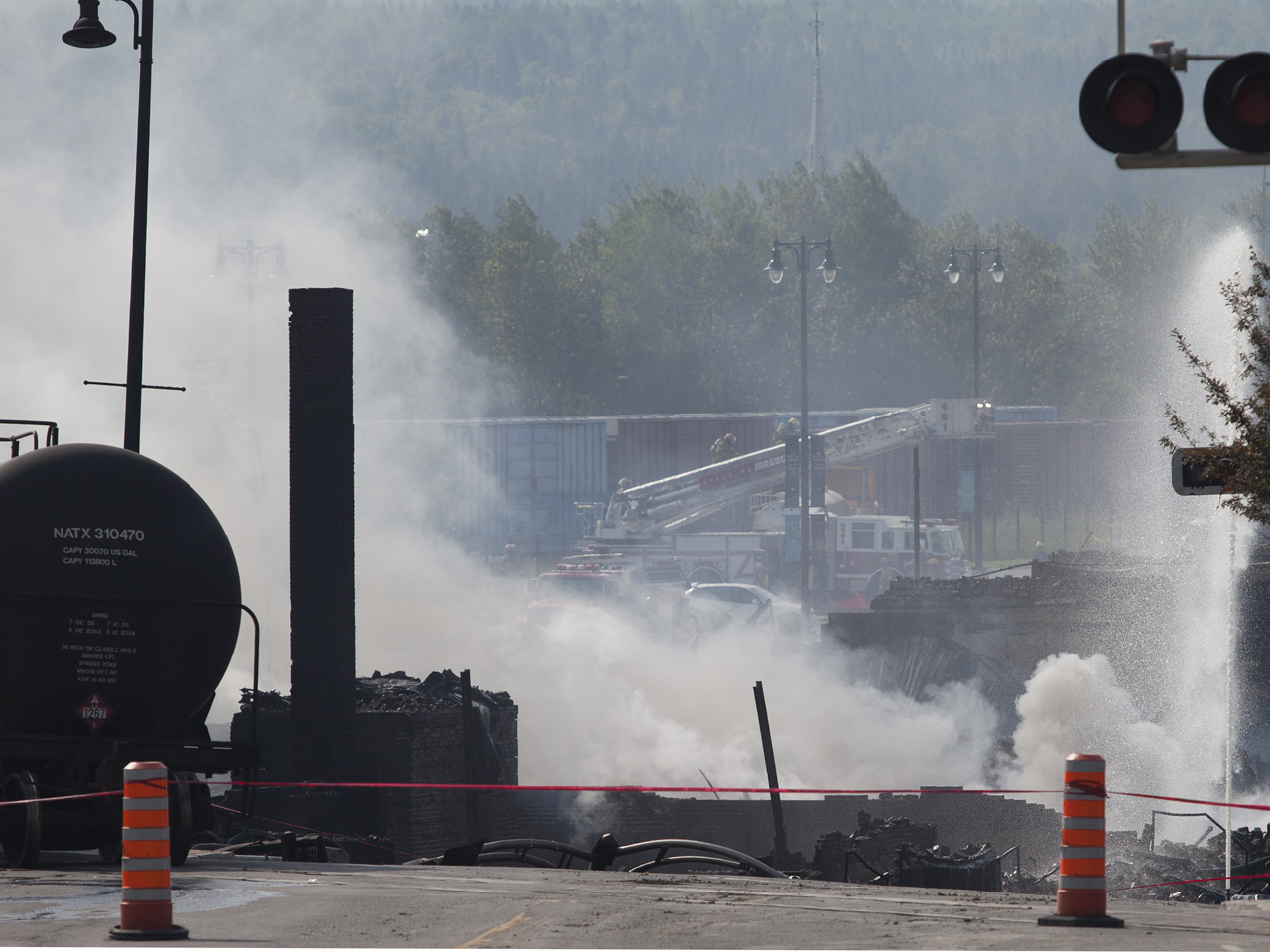 LAC-MEGANTIC, Quebec Fires continued to smolder two days after a massive fire caused by a train derailment all but destroyed the heart of this picturesque town of 6,000.

Firefighters' attempted to search for some 40 people still missing after a runaway oil tanker train exploded over the weekend, killing at least five people, were hindered by hazardous conditions Monday, officials said. But they held back from searching the downtown area of Lac-Megantic, saying it was still too dangerous.

Meanwhile, crews worked to contain oil spilling in the Claudiere River which feeds into the St. Lawrence.

The Quebec government issued a statement saying the leak was "serious, but under control." The statement said the oil could spread as far as Quebec City.

Floating barriers have been set up to try to stop the oil from heading downstream.

Quebec provincial police Sgt. Benoit Richard said Monday morning there was no searching overnight because the situation remained too dangerous.

He said only a small part of the devastated scene has been searched as firefighters made sure all flames were out.

"It looks like a war zone here," said Prime Minister Stephen Harper. "A large part of the downtown has been destroyed, it's really just terrible. There has been loss of life as we all know and there are still many, many people missing."

Many of those missing were believed to have been drinking at a popular downtown drinking establishment when the explosions occurred and rescuers were still not able to reach the bar, Richard said.

"Hopefully we'll be able to open up more areas for searching during the day," he said.

The conductor says he secured the train's brakes before going to a hotel for the night, reports Mike Armstrong of Canada's Global Television. Company officials say it appears the cars became loose and rolled seven miles downhill.

The train derailed and exploded. The giant fireball flattened much of the small downtown at around 1 a.m. in the morning.

At least 30 buildings have been destroyed and officials say it will be days before the extent of the damage is realized.

About a third of the community of 6,000 was forced from of their homes by the explosion and flames.

Firefighters on Monday were focusing their efforts on two oil-filled cars dousing them with water and foam in an attempt to keep them from overheating and exploding.

All but one of the train's 73 tanker cars were carrying oil when they somehow came loose early Saturday morning, sped downhill nearly seven miles into the town of Lac-Megantic, near the Maine border, and derailed, with at least five of the cars exploding.

The growing number of trains transporting crude oil in Canada and the United States had raised concerns of a major derailment, and this one was sure to add to the debate over a proposed cross-U.S. oil pipeline Canada says it badly needs.

"This is an unbelievable disaster," said Canadian Prime Minister Stephen Harper, who toured the town Sunday and compared it to a war zone. "This is an enormous area, 30 buildings just completely destroyed, for all intents and purposes incinerated. There isn't a family that is not affected by this."

Anne-Julie Huot, 27, said at least five friends and about 20 acquaintances remained unaccounted for.

"I have a friend who was smoking outside the bar when it happened, and she barely got away, so we can guess what happened to the people inside," Huot said. "It's like a nightmare."

A coroner's spokeswoman said it may not be possible to recover some of the bodies because of the intensity of the blasts. Spokeswoman Genevieve Guilbault said the bodies are so badly burned that identifying them could take a long time. She said none of the five bodies that have been found so far have been identified and two have been sent to Montreal for further analysis. All of the autopsies will be conducted in Montreal because there is no laboratory in town.

For the second day in a row, she urged families of the missing to come forward with details that could help them identify the bodies, such as tattoos, dental records, or objects that would contain the DNA of the deceased.

The train's oil was being transported from North Dakota's Bakken oil region to a refinery in New Brunswick. Because of limited pipeline capacity in the Bakken region and in Canada, oil producers are increasingly using railroads to transport oil to refineries.

The Canadian Railway Association recently estimated that as many as 140,000 carloads of crude oil will be shipped on Canada's tracks this year — up from 500 carloads in 2009. The Quebec disaster is the fourth freight train accident in Canada under investigation involving crude oil shipments since the beginning of the year.

Harper has called railroad transit "far more environmentally challenging" while trying to persuade the Obama administration to approve the controversial Keystone XL oil pipeline from Canada to the Gulf Coast. Greenpeace Canada said Sunday that federal safety regulations haven't kept up with the enormous growth in the shipment of oil by rail.

Officials with the Montreal, Maine & Atlantic Railway said that despite the disaster, they feel transporting oil by rail is safe.

"No matter what mode of transportation you are going to have incidents. That's been proven. This is an unfortunate incident," said Joe McGonigle, Montreal, Maine & Atlantic Railway's vice president of marketing.

He said the company believes the train's brakes were the cause. "The train was parked, it was tied up. The brakes were secured. Somehow it got loose," he said.

McGonigle said there was no reason to suspect any criminal or terror-related activity.