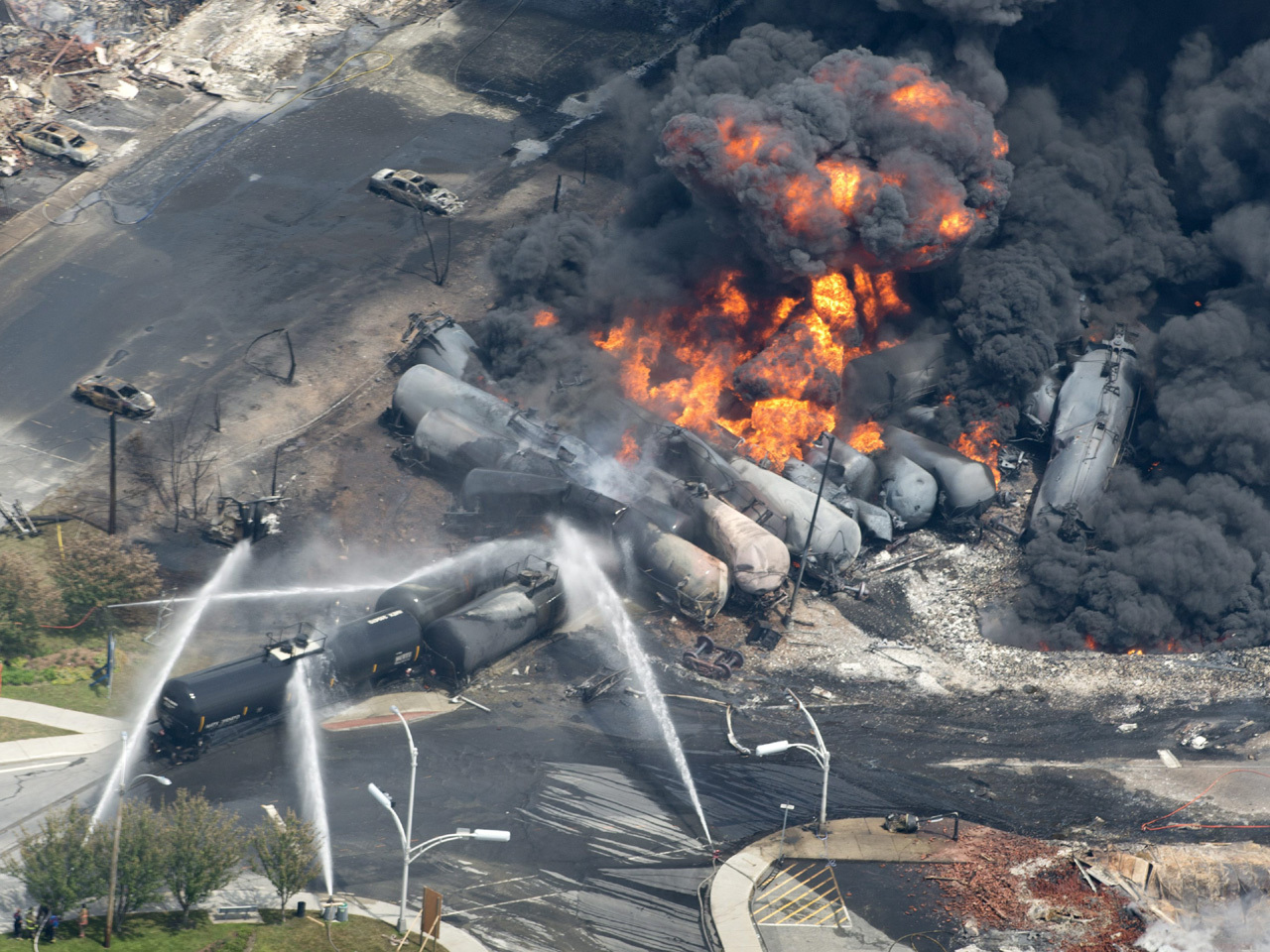 LAC-MEGANTIC, Quebec Fires continued burning late Saturday nearly 24 hours after a runaway train carrying crude oil derailed in eastern Quebec, sparking explosions and a blaze that destroyed the center of a town and killed one person. Police said they expected the death toll to increase.

Witnesses said the eruptions sent residents scrambling through the streets under the intense heat of towering fireballs and a red glow that illuminated the night sky. Many locals in Lac-Megantic were shaken out of their slumber after the area shook from blasts and shot flames higher than the steeple of a nearby church.

Quebec provincial police Lt. Michel Brunet confirmed that one person had died. He refused to say how many others might be dead, but said authorities have been told "many" people have been reported missing.

Lt. Guy Lapointe, a spokesman with Quebec provincial police, said: "I don't want to get into numbers, what I will say is we do expect we'll have other people who will be found deceased unfortunately.

"We also expect that down the line the number of people who are reported missing with regards to people that who have actually lost their lives will much higher in the sense that there will be more people reported missing that people actually found dead."

Lapointe refused to give any estimate of people unaccounted for because police were having difficulty getting a fixed number.

"People are calling in reported love ones missing, some people are reported two, three times missing by different members of the family," he said.

The derailment caused several tanker rail cars to explode in the downtown, a popular area known for its bars that often bustles on summer weekend nights.

Police said the first explosion tore through the town shortly after 1 a.m. local time. The fire then spread to several homes.

Flames and billowing black smoke could still be seen long after the 73-car train derailed.

"When you see the center of your town almost destroyed, you'll understand that we're asking ourselves how we are going to get through this event," an emotional Mayor Colette Roy-Laroche told a televised news briefing.

The cause of the accident was believed to be a runaway train, the railway's operator said.

The president and CEO of Rail World Inc., the parent company of Montreal, Maine & Atlantic Railway, said the train had been parked uphill of Lac-Megantic.

Burkhardt, who was mystified by the disaster, said the train was parked because the engineer had finished his run.

"We've had a very good safety record for these 10 years," he said of the decade-old railroad. "Well, I think we've blown it here."

The multiple blasts came over a span of several hours as the fire tore through the center of town, destroying at least 30 buildings. Lines of tall trees in the area looked like giant standing matchsticks, blackened from bottom to tip.

Witnesses said the eruptions sent many stunned locals darting through the streets under the powerful heat of towering fireballs and a red glow that illuminated the night sky.

Patrons gathered by a nearby bar were sent scrambling for their lives after the thunderous crash and wall of fire blazed through the early morning sky.

Bernard Theberge, who was outside on the bar's patio at the time of the crash, feared for the safety of those inside the popular Musi-Cafe when the first explosion went off.

"It was like a movie," said Theberge, who considered himself fortunate to escape with only second-degree burns on his right arm.

"Explosions as if it were scripted — but this was live."

Firefighters doused the blaze for hours. Local fire chief Denis Lauzon described the scene as one akin to a war zone.

Dozens of residents gathered hours after the explosion at the edge of a wide security perimeter and many feared the worst. About a kilometer (0.6 miles) down the town's main street, flames danced around a railway tanker that sat at the edge of the road.

"On a beautiful evening like this with the bar, there were a lot of people there," said Bernard Demers, who owns a restaurant near the blast site. "It was a big explosion. It's a catastrophe. It's terrible for the population."

Demers, who fled his home, said the explosion was "like an atomic bomb. It was very hot. ... Everybody was afraid."

Charles Coue said he and his wife felt the heat as they sprinted from their home after an explosion went off a couple of hundred yards (meters) away.

"It went boom and it came like a fireball," he said.

Another resident Claude Bedard described the scene of the explosions as "dreadful."

"The Metro store, Dollarama, everything that was there is gone," he said.

Environment Quebec spokesman Christian Blanchette said a large but undetermined amount of fuel had also spilled into the Chaudiere River. Blanchette said the 73 cars were filled with crude oil, and at least four were damaged by the explosions and fire.

"We also have a spill on the lake and the river that is concerning us. We have advised the local municipalities downstream to be careful if they take their water from the Chaudiere River."

He added that a mobile laboratory had been set up to monitor the quality of the air.

Firefighters and rescue workers from several neighboring municipalities, including Sherbrooke and Saint-Georges-de-Beauce, were called in to help deal with the disaster.

Firefighters from northern Maine were also deployed to the Quebec town, according to a spokesman at the sheriff's office in Franklin County.

Prime Minister Stephen Harper expressed his sympathy in a statement.

"Our thoughts and prayers go out to the families and friends of those affected by this morning's tragic train derailment and subsequent fires in Lac-Megantic, Quebec," Harper said.

"We hope evacuees can return to their homes safely and quickly. The people of Lac-Megantic and surrounding areas can rest assured that our government is monitoring the situation and we stand by ready to provide any assistance requested by the province."

The train, reportedly heading toward Maine, belongs to Montreal Maine & Atlantic. According to the railroad's website, the company owns more than 500 miles (800 kilometers) of track serving Maine, Vermont, Quebec and New Brunswick.

Last week a train carrying petroleum products derailed in Calgary, Alberta, when a flood-damaged bridge sagged toward the still-swollen Bow River. The derailed rail cars were removed without spilling their cargo.

The Quebec accident is likely to have an impact across the border. In Maine, environmentalists and state officials have previously raised concerns about the threat of an accident and a spill from railroad tank cars carrying crude oil across the state.

The Maine Department of Environmental Protection has begun developing protection plans for the areas where the trains travel, spokeswoman Samantha Warren said recently.