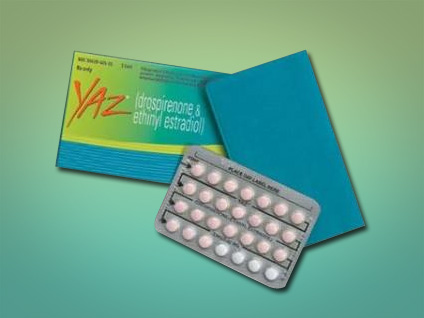 (CBS/AP) Yaz and other newer, widely-used birth control pills are under the FDA's microsope over safety labels. The agency wants the drugs' labels to mention a potential higher risk of blood clots in the legs and lungs.

The FDA's expert panel voted 21-5 Thursday that labeling on the popular Bayer drugs is inadequate and needs more information about the potential clotting risk in light of recent research that found ties.

Yaz, its predecessor Yasmin and related pills use a man-made hormone called drospirenone, which mimics the female hormone progesterone. Approved in 2006, Yaz grew into the best-selling birth control pill in the U.S. by 2008, backed by a big advertising budget that emphasized its ability to clear up hormone-related side effects like acne, bloating, and moodiness. But prescriptions have fallen more than 80 percent in the last two years amid safety concerns.

Panelists discussed the conflicting data on drospirenone-containing drugs for nine hours before making their decision. While the group disagreed on the quality of the evidence, the overwhelming majority said it should be clearly stated in the label, along with a warning of the potentially fatal nature of blood clots.

"Clearly the wording is inadequate and incomplete," said Dr. Richard Bockman of New York's Hospital for Special Surgery. "Adverse events have to be made graphic so physicians and patients are aware of the consequences."

In an earlier vote, panelists voted 15-11 that the pills remain a beneficial option for preventing pregnancy. The majority ruling amounts to a vote of confidence for keeping the drugs on the market, though well over a third of panelists voted against the drug's overall benefit, citing safer alternatives.

"Without any clear benefit, and given the potentially catastrophic risk, I voted no," said Mark Woods of New York University School of Medicine. "I can see no real group of patients that this drug benefited over existing alternatives."

Two large studies conducted by Bayer have shown no difference in blood clots between patients taking the company's drugs and patients taking older medications. But five large studies have suggested drospirenone-containing pills carry a slightly higher risk of blood clots than older birth control pills, though events are very rare. Even a slightly higher risk can be critical though, because blood clots can trigger heart attacks, strokes and blockages in lungs or blood vessels.

The most recent study by the FDA found women taking Yasmin were 75 percent more likely to suffer a blood clot than patients taking a combination of older drugs. The absolute risk, however, was still far less than a fraction of a percent.

FDA scientists noted shortcomings with some Yaz and Yasmin studies, including missing data about patients' weight whether they smoked, which are both big risk factors for blood clots. While not definitive, panelists still said the information should be explained clearly on the label.

"I think we can do a much better job than labels I have seen," said Dr. Valerie Montgomery Rice, of the Morehouse School of Medicine.

Yaz and other drospirenone-containing pills accounted for 16 percent of the hormonal contraceptives used in the U.S. last year, behind Warner Chilcott's Loestren, Johnson & Johnson's Ortho Tri-Cyclen and several other oral contraceptives.

The FDA has not set a timetable for any changes in Yaz's labeling and many doctors say it won't change how often they prescribe the drug. They point out that the risk of blood clots with any birth control pill is still far lower than that associated with pregnancy and birth, when surging hormone levels and reduced blood flow dramatically increase the chances of clotting.