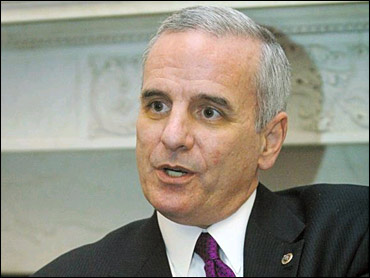 A senior Food and Drug Administration official said Wednesday that it was unfortunate his agency stopped and inspected a busload of seniors returning from a medicine-buying trip to Canada.

"This is not consistent with our current practice," said John Taylor, the FDA's associate commissioner for regulatory affairs. "I would not expect it to happen again."

The FDA says it cannot guarantee the safety of medications purchased in Canada and has been increasing pressure on state and local programs that help people buy the lower-cost prescription drugs there .

The bus-stopping incident occurred last October but wasn't made public until Wednesday, when Sen. Mark Dayton, D-Minn., wrote to the FDA to complain about it. Dayton, a millionaire, donates his entire Senate salary to pay for the bus trips from Minnesota, allowing seniors to take advantage of the much lower drug prices in Canada.

A Dayton spokeswoman, Chris Lisi, said the senator only recently became aware of the incident.

Dayton wrote that the inspection caused stress for the elderly travelers.

"Is it the beginning of a new practice of harassment and intimidation against elderly citizens who are traveling themselves to Canada to make their prescription drug purchases?" he asked.

Taylor said it was not.

"This does not signal a change in policy," he said. "It was an unusual event."

Taylor said the inspection was requested by the U.S. Customs Service, when the bus made its way back across the border. Although importing drugs is technically illegal, the FDA allows people to purchase drugs in Canada for their personal use.

After a "cursory review," Taylor said, the FDA agents determined that the drugs could be imported and no drugs were seized.

"We have limited inspection resources," Taylor said. "Our focus is largely on entities that facilitate purchases," such as pharmacies.