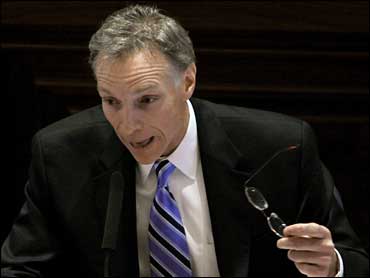 Gov. Rod Blagojevich was hundreds of miles away but his voice boomed through the Illinois Senate's chambers Tuesday as his impeachment jurors listened to FBI wiretaps of conversations in which he seems to demand campaign contributions in exchange for signing legislation.

One person on the

recordings
assures Blagojevich that a horse-racing track owner "is good for it" and just has to decide "what accounts to get it out of." Another assures him the track owner knows he must keep his "commitment" soon.

Blagojevich replies with comments like "good" and "good job." Legislation sought by the racing industry had been sent to the governor's desk, and on the tapes, he says to reassure a racing lobbyist he hopes "to do this so we can get together and start picking some dates to do a bill-signing."

Senators conducting the trial, which Blagojevich is boycotting though it could remove him from office within days, listened intently as the fuzzy, indistinct conversations echoed through the room - the heating system, reporters typing on laptops and the occasional cough accounting for the only other noise.

Neither the governor nor the others on the call - the governor's brother and chief fundraiser Robert Blagojevich and former chief of staff Lon Monk, officials say - specifically mentions money or any amounts.

The governor was arrested last month on a variety of corruption charges, including scheming to benefit from appointing President Barack Obama's U.S. Senate replacement and demanding campaign contributions in exchange for state services. He denies any wrongdoing and neither his brother nor Monk has been charged.

Before the tapes were played Tuesday, an FBI agent vouched for the accuracy of those and other Blagojevich quotes that were included the federal criminal complaint against him.

Listen to audio and read transcripts of the wiretaps played at the trial.

Again and again, agent Daniel Cain told state senators he had accurately quoted Blagojevich in a sworn affidavit filed when the governor was arrested. At each stage, House prosecutor David Ellis displayed the most damning quote on a poster board.

The affidavit quoted Blagojevich saying his power to name a replacement to Obama's vacant Senate seat was a "valuable thing, you just don't give it away for nothing." Ellis asked if that was accurate. Yes, Cain replied.

As Blagojevich's private words took center stage in Springfield, the governor remained in New York for the second day of a media tour focused on portraying the impeachment as unfair and politically motivated.

The embattled Illinois governor said on The Early Show Tuesday he's skipping his impeachment trial in the Illinois State Senate because he knows the lawmakers will kick him out of office, so he's bringing his case to the court of public opinion, instead.

"If present trends continue," Blagojevich said, "I'll be out of work in the not-too-distant future. I'm not delusional in terms of what my likelihood of success is to convince those senators to give me a fair trial."

In an interview with The Associated Press, Blagojevich did not directly answer when asked whether he will step aside quietly if convicted by the Senate.

"I'll respect the law and the Constitution and the rules," he said, "and whether or not there are legal remedies to pursue beyond this we haven't really discussed ... but I'm not going to rule out what some of those options might be."

Blagojevich also said he hasn't done anything to prepare state government for the switch to a new governor.

"This was completely unexpected and not something that we envisioned happening," he said.

Video:
Ill. Senators Hear Gov. Tapes
Blagojevich doesn't deny making the comments alleged by federal prosecutors. But he says they were taken out of context and don't amount to anything illegal.

"In the end, a lot of it was talk and exploring ideas," Blagojevich told the AP. "I never, ever intended to violate any criminal law."

The allegation at the center of the tapes played for senators is that Blagojevich pressured John Johnston, owner of two Chicago-area harness-racing tracks, to donate money by the end of 2008, when a new ethics law would restrict donations.

Prosecutors say Blagojevich threatened not to sign legislation giving tracks a portion of casino-generated revenue unless he got the donation.

It's not clear whether Johnston ever made a donation; federal prosecutors have seized Blagojevich's campaign records. Johnston has not been charged with any illegal activity.

The about five minutes of recordings played Tuesday represent only a handful of the many made during the federal investigation. U.S. Attorney Patrick Fitzgerald is keeping most of the recordings secret, but permitted senators to hear the material dealing with just the horse track allegation.

Blagojevich's arrest triggered impeachment proceedings in the Illinois Legislature, where lawmakers have spent six years butting heads with Blagojevich. The House voted 117-1 to impeach Blagojevich - the only "no" came from his sister-in-law - and now the Senate is conducting a trial on whether to remove him.

Blagojevich says the trial is meant to get him out of the way so Springfield insiders can raise income taxes. He also says the Senate's trial rules are so biased that he can't present a real defense.

Neither the prosecution nor the defense is allowed to summon any witnesses whose testimony might interfere with federal prosecutors' criminal case against Blagojevich, although their public statements could be introduced as evidence. But Blagojevich has not asked to call witnesses or present any evidence at all, and said he does not plan to participate in any way.

Senate President John Cullerton says it's not too late for Blagojevich to defend himself at the impeachment trial instead of pleading his case to the media.

Seats for Blagojevich and his attorney sat empty in the Senate chamber, where Illinois Supreme Court Chief Justice Thomas Fitzgerald has ordered the trial to go forward as if Blagojevich had entered a not guilty plea.

No other Illinois governor has been impeached, let alone convicted in a Senate trial. It would take a two-thirds majority - or 40 of the 59 senators - to remove Blagojevich. The Senate also could bar him from ever again holding office in Illinois.

If the Senate votes to oust Blagojevich, Democratic Lt. Gov. Patrick Quinn would replace him.

The outcome of Blagojevich's impeachment trial has no legal impact on a separate criminal case against the governor. No trial date has been set on those charges.