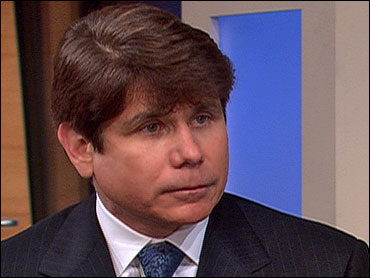 The embattled Illinois governor said on The Early Show Tuesday he's in the second day of a media blitz rather than attending his impeachment trial in the Illinois State Senate because he knows the lawmakers will kick him out of office, so he's bringing his case to the court of public opinion, instead.

"If present trends continue," Blagojevich said, "I'll be out of work in the not-too-distant future. I'm not delusional in terms of what my likelihood of success is to convince those senators to give me a fair trial.

" ... It's more important than me. It's about the people who twice elected me. You can't throw a governor out without giving that governor a chance to show he did nothing wrong. That's what they're doing. It's a dangerous precedent.

"But if you're asking me do I see myself like a modern-day Frank Capra movie, and I'm the Jimmy Stewart or Gary Cooper character, a guy idealistically trying to do what's right for people, fighting a system, and then be pushed back? Yeah, I see myself that way."

When co-anchor Harry Smith said, "It's been suggested the real reason you're here talking to people, talking beyond the impeachment hearings, is the fact that you're trying to soften up the (future) jury pool for when your federal trial starts," Blagojevich called it "a cynical interpretation. I'd like the senators to change the rules, give me a chance to bring in all the tapes and bring in witnesses so I can prove my innocence."

He repeatedly called it unfair that state senators wouldn't allow him to fuly air the tapes of his wiretapped conversations. Doing so, he claimed, would show why snippets released by federal prosecutors were taken out of context and misleading.

Co-anchor Maggie Rodriguez repeatedly tried to get Blagojevich to explain why he didn't challenge in court the state senators' refusal to allow him to call witnesses he asserts would prove his innocence on the seat-selling charges. He said his lawyers had looked exhaustively for a legal precedent supporting such a move, but couldn't find any.

His media tour, Blagojevich said, "is all about trying to do the best I can to persuade those senators to change their rules. We tried to talk to them. They've made a decision. It's a very strong political process. And unfortunately, again, there's a big principle involved, throwing out a governor elected twice by the people without giving that governor a chance to be able to bring witnesses in and prove his innocence and to bring charges that they are prevented from proving up. It's just so fundamentally unconstitutional and wrong."

Which witnesses would he call in the senate trial, if given the chance?

"I want to bring (former Illinois) congressman (and current chief of staff to President Obama) Rahm Emanuel, who said on 'Face the Nation' on your network a little over a week ago that there was nothing inappropriate in his conversations with me about a Senate pick. I want to bring Congressman Jesse Jackson Jr. I want to bring Valerie Jarrett, a high-ranking official in the Obama administration. We requested that in the (Illinois) house. They denied it. I want to bring in U.S. senators I talked to. I want to bring in everybody and anybody that I talked to about the U.S. Senate seat who would show and prove that I did nothing wrong and I was doing everything ultimately to get to a position where I did right by the people."

Blagojevich admitted he hasn't heard from many supporters in the world of politics. "You know, during times like this there's a saying Dr. (Martin Luther) King had. 'In the end, we remember not the words of our enemies but the silence of our friends.' It's a very lonely period. When things like this happen, people tend to be afraid to talk to you."

Blagojevich continued to insist state lawmakers are after him because of all the good he's done for the little guy.

Asked by co-anchor Julie Chen if quitting was an option even at this late date, Blagojevich responded, "No. I said consistently I won't resign for two reasons. One, I did nothing wrong and therefore I won't acknowledge anything that I didn't do. Had I did something wrong, I'd have met my responsibilities and I would have resigned. That would have been my responsibility. Secondly, most importantly, I'm not going to resign. I have two little girls. And they're hearing a lot of bad things about their dad.

"For me to resign would be to basically say that they shouldn't feel their dad is an honest man, and I don't want be in a position where they should be ashamed of their father. So I'll fight to the very end.

"It's a very difficult time for our family, and my wife and I, we got them a little puppy during the Christmas holiday, something I was resisting for the last couple years. But when all this happened, it was a therapeutic thing for our girls. They love their little puppy, and I think she's helping them through this."