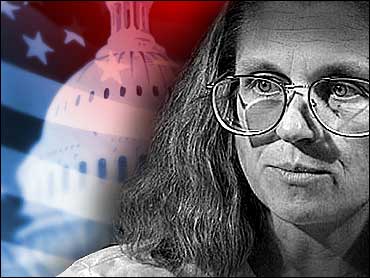 An FBI whistleblower Thursday compared the agency's bureaucracy to the "Little Shop Of Horrors," telling Congress the FBI could have done more to prevent the Sept. 11 terrorist attacks.

"Mistakes are inevitable," Coleen Rowley told the Senate Judiciary Committee and a nationwide television audience. "But a distinction can and should be drawn between those mistakes made when trying to do the right thing and those mistakes ... due to selfish motives."

In opening remarks, Rowley said she would not talk about the details of the case that prompted her now-famous memo concerning a man in federal custody in Virginia accused of conspiring in the Sept. 11 terror attacks that killed thousands.

Instead, she focused her remarks on the frustrations of working in an "ever-growing bureaucracy."

"The resulting cumbersomeness of getting approval for even the smallest decision is obvious. ... Like the 'Little Shop of Horrors' movie, the bureaucracy just keeps saying 'feed me, feed me.'"

Earlier Thursday, FBI Director Robert S. Mueller told the committee the FBI needs a culture change and a shift in emphasis with terrorism at the top of its priority list.

In nearly four hours of questioning, Mueller suggested that Congress expand surveillance powers put into law only seven months ago, and said his storied agency needs to be "more flexible, agile and mobile" if it is to prevent future terrorist attacks.

He disclosed it could take two or three years — far longer than the one year he originally hoped — to bring FBI computer systems up to standards needed to deal with information efficiently.

The panel met as President Bush disclosed plans for a prime-time address to review his latest plans to strengthen America's defenses against terrorism. Officials said the president would propose creation of a new Department of Homeland Security, combining responsibilities now scattered in several federal agencies — including customs, immigration, the Secret Service and the Federal Emergency Management Agency.

Members of the House and Senate intelligence committees were also meeting Thursday in a guarded room in the Capitol to continue their own review of the events of Sept. 11.

While Mueller has appeared in public several times since the worst terrorist attacks in the nation's history, Rowley was making her debut.

In a 13-page memo to Mueller on May 21, she accused bureau headquarters in Washington of putting roadblocks in the way of Minneapolis field agents trying to investigate Zacarias Moussaoui, who is charged with conspiring with the hijackers in the Sept. 11 attacks.

"We have a culture in the FBI that there's a certain pecking order and it's pretty strong, and it's very rare that somebody picks up the phone and calls a rank or two above themselves," Rowley said.

Last August, FBI agents in Minnesota arrested Moussaoui, a French citizen of Moroccan descent, on an immigration violation after a flight school instructor became suspicious of his desire to learn to fly a commercial jet.

FBI headquarters turned down the Minneapolis' office request to seek a search warrant to examine Moussaoui's computer. After Sept. 11, the FBI got the warrant and found information related to jetliners and crop-dusters on the computer hard drive, officials said. The government grounded crop-dusting planes temporarily because of what it found.

During his testimony, Mueller faced sharp questioning about the FBI's failure to alert the committee earlier this year about the so-called Phoenix memorandum, a document sent to agency headquarters last summer noting that several Arabs were suspiciously training at a U.S. aviation school in Arizona.

Sen. John Edwards, D-N.C., asked Mueller why the headquarters agent to whom the memo was addressed, David Frasca, had not told the Judiciary Committee about it in January when Frasca met with the panel's staff. Mueller said he did not know.

Prodded by another member, Sen. Arlen Specter, R-Pa., Mueller defended his own decision not to alert the panel about the memorandum. The FBI chief said he thought the information about the memo should go to the intelligence committees, but Specter replied, "That's not true. That's not true."

"If we had known about the Phoenix memorandum, we could have made some pretty good suggestions to you," Specter said.

Along with the criticism, Mueller also won praise from several senators for his efforts to reform an agency that Sen. Charles Schumer, D-N.Y., described as hidebound. "You inherited a great organization but also a great bureaucracy," added Sen. Mike DeWine, R-Ohio.

Mueller offered no specifics about the changes he would like to see in the legislation Congress approved last year to strengthen law enforcement powers in the wake of the terrorist attacks.

Sens. John Kyl, R-Ariz., and Schumer introduced a measure on Wednesday to make it easier for agents to obtain wiretaps and conduct searches in foreign intelligence cases, saying that if the FBI had been able to listen in on Moussaoui it might have been able to prevent the attacks.

"This is a problem, and we're looking for solutions to address this problem," Mueller replied, adding that the Justice Department would be issuing a formal opinion on the legislation in the future.

"We are looking at ways to tweak" the legislation passed by Congress late last year, he added.

Mueller had previously outlined plans to reorganize the FBI to devote greater resources to anti-terrorism, including its ability to analyze available intelligence. "This Congress is all too familiar with the FBI's analytical shortcomings," he said. "Building subject area expertise or developing an awareness of the potential value of an isolated piece of information does not occur overnight," he said. "It is developed over time."

At the same time, he told seemingly incredulous senators that computer technology at the agency didn't allow an agent to search all existing electronic reports for a key phrase — the term "flight school," for example.

Asked time after time whether Rowley's memo or the Phoenix memo could have prevented the disastrous attacks, he sidestepped.

"I'm hesitant to speculate as to what would have happened if ..." he said at one point.