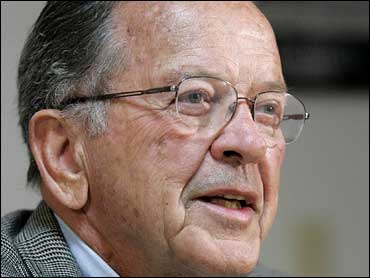 Stevens, 83, is under a federal investigation for his relationship with Bill Allen, an oil field services contractor who was convicted this year of bribing state lawmakers.

A 2000 renovation project more than doubling the size of Stevens' home in the ski resort community of Girdwood was overseen by Allen, who is founder of VECO Corp. The Alaska-based oil field services and engineering company has reaped tens of millions of dollars in federal contracts.

Agents from the FBI and Internal Revenue Service started their search at the senator's home Monday afternoon, said Dave Heller, FBI assistant special agent. He said he could not comment on the nature of the investigation.

CBS station KTVA in Anchorage reports that more than a dozen agents removed articles from Stevens' home, including a camera and recording equipment.

A law enforcement official familiar with the case confirmed the raid on Stevens' home was focused on records related to the ongoing VECO investigation. The official was not authorized to discuss the matter publicly and spoke only on condition of anonymity.

An e-mail statement issued by Stevens through his Washington, D.C., spokesman said federal agents had alerted his attorneys that they wanted to search his home.

Stevens, who has been in office since 1968 and is the longest-serving Republican in Senate history, said the interests of justice would be best served if he commented after the investigation.

"I continue to believe this investigation should proceed to its conclusion without any appearance that I have attempted to influence its outcome," Stevens said. "The legal process should be allowed to proceed so that all the facts can be established and the truth determined."

"For over 50 years I have worked hard for Alaskans as part of our territorial, state and federal governments. And I will continue to do all I can to assure that government meets our people's unique needs."

Located 40 miles south of Anchorage, Girdwood is nestled in a valley next to Mount Alyeska and has evolved from a gold mining town into Alaska's only year-round resort community.

Neither the U.S. senator nor his son has been charged.