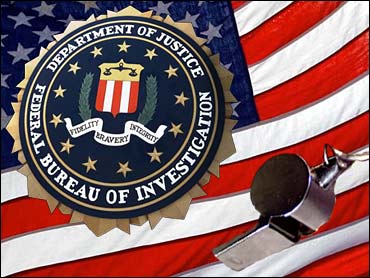 The FBI has notified Minneapolis FBI agent Jane Turner, who accused colleagues of stealing a Tiffany crystal globe from the World Trade Center ruins, that it intends to fire her for poor performance. Two senators have written FBI Director Robert Mueller on her behalf.

The FBI told Turner in an April 14 letter that she would be fired because her performance "does not meet expectations."

Sens. Charles Grassley, R-Iowa, and Patrick Leahy, D-Vt., said in their letter Wednesday that a review last year, after she reported the theft, said Turner "tarnished the FBI's reputation" with the Federal Emergency Management Agency and the U.S. Attorney's office.

"This language strongly suggests retaliation," wrote the senators, both of whom serve on the Judiciary Committee. Turner's Washington lawyer, Stephen Kohn, said that Turner had reported the theft to FEMA and the U.S. Attorney's office.

An FBI official said that the phrase "tarnished the FBI's reputation" referred to Turner being disruptive at a meeting of federal agencies in Minneapolis and had nothing to do with the crystal globe.

Last year's review also said of Turner, a 24-year FBI veteran: "She does not work well with co-workers and will not work with them."

In their letter, Grassley and Leahy said, "We believe that her case deserves your personal attention to ensure that her rights as a whistleblower are protected and that she is not terminated for putting truth and justice above the FBI's image."

The FBI has told Turner that her dismissal will be held in abeyance until the Justice Department completes its review of her whistleblower claim.

Last year, on the anniversary of the Sept. 11 attacks, Turner told the Justice Department's inspector general's office that she discovered the Tiffany globe on a secretary's desk. Ironically, Turner was investigating civilian theft at ground zero when she found the globe.

A month later, she contacted Leahy, who was chairman of the Judiciary Committee at the time, and Grassley, who has pushed for more whistleblower protections.

"It's pure and simple retaliation," said Kohn, her lawyer.

He said Turner, at her request, has been on paid administrative leave since last fall because she was subjected to oral abuse at work after reporting the theft of the globe.

This is not Turner's first run-in with the FBI.

In 2001, she filed a sex discrimination lawsuit alleging she was passed over for jobs that went to less-qualified male agents in 1992 and 1995 and that she faced other discrimination while working in Minot, N.D., starting in 1987.

She alleged that when she transferred to Minneapolis in 2000, her desk was isolated from other agents, who were warned to avoid her.

Last year, another FBI whistleblower in the Minneapolis office, Coleen Rowley, alleged that FBI headquarters ignored her office's pleas to investigate Zacarias Moussaoui aggressively before the 2001 terrorist attacks. Moussaoui has since been charged with conspiracy in the Sept. 11 attacks.