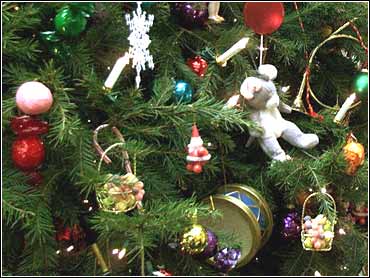 BEND, Ore. -- The FBI says a 28-year-old man faces federal and state charges after he robbed a credit union, then went on a shopping spree that included buying a Christmas tree he later used to try and hide from police.

The Oregonian reports that the FBI says Brett Gillispie-Comstock twice went into a Selco Community Credit Union in Bend, Ore., on Dec. 16 before he walked to a teller, told her he was ready to open an account and handed her a note demanding $5,000.

He left with $1,373 in an envelope. The newspaper reports that Bend police officers found Gillispie-Comstock nearby about 40 minutes after the robbery and arrested him.

Authorities say Gillespie-Comstock told investigators that he and his mother had lost $400 gambling and that they needed money for rent, Christmas presents and a Christmas tree.

The Oregonian reports that authorities say he used some of the money to buy a Christmas tree. The FBI says he had been trying to use the tree to hide his face when police stopped him.