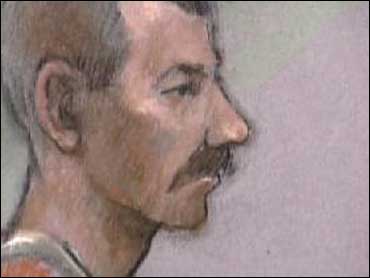 A Massachusetts man is charged with trying to hire a hitman to kill his estranged wife, mother-in-law and daughter, requesting that the 7-year-old girl be shot in the chest rather than the head so she could have an open casket at her funeral.

John Orlowski, 49, of Beverly, Mass., did not enter a plea Monday morning but told the judge he suffers from depression and has not taken his medication in three weeks

Authorities first found out about the plot last Thursday and arrested Orlowski on Friday.

Orlowski met the alleged hitman while they were both inmates at the Middleton jail, according to court documents.

He approached the man again after they were both released, and even gave him a diagram of his wife's house indicating the location of bedrooms "where the targets slept," and a location in the home where he could find a pistol, according to court documents. Orlowski's intent was to make the murders look like a drug hit.

Orlowski initially offered $500 to plant drugs on his wife, saying if she were arrested he'd get their house in a divorce, the man told police. But he later increased the offer to $2,000 to kill the two women and the child, according to court documents.

But the prospective hitman — a self-professed member of the Crips with a lengthy criminal record — was troubled by the plot, especially the prospect of killing a child, so he told his mother, and she called the FBI.

Working with the FBI, the man met with Orlowski on Friday and taped a conversation in which Orlowski specified how many bullets he wanted in each victim — one in the chest for his daughter and two each in the head for his wife and mother-in-law, according to authorities.

When told by the man that he would shoot his daughter in the chest, Orlowski asked whether that would be enough to kill her. When the man said a bullet from a .45-caliber handgun would put a hole in her chest, Orlowski "indicated his satisfaction," the FBI said in the affidavit.

"I would like an open casket for my daughter," Orlowski said.

During the recorded conversation, the man repeatedly expressed concern that Orlowski might regret the killing of his daughter. But Orlowski assured the man that he would have no such regret, saying at one point, "It's got more to do with my wife than anything," according to an affidavit prepared by an FBI agent.

CBS affiliate WBZ correspondent Sera Congi reported that Orlowski allegedly stated, "The tree has to be cut down. Everything has to start anew."

Orlowski's wife took out a restraining order against him earlier this year and police seized 121 guns from his home.

During a subsequent arrest for violating the restraining order, Orlowski was caught with a 9 mm handgun.

His lawyer, James Roche, said there was no violence involved in the domestic charges, even though Orlowski was charged with assault and battery.

"I think the two of them were tussling over a purse," he said.

Roche refused to comment when asked if Orlowski's depression would be used in his defense. Roche said Orlowski intends to plead not guilty.

Orlowski was ordered held without bail pending a detention hearing scheduled for Thursday in U.S. District Court in Boston.

He faces a maximum sentence of 10 years in prison, to be followed by three years of probation and a $250,000 fine if convicted on the murder-for-hire charge.

Before his earlier arrests, Orlowski had not been working and was receiving disability pay for a physical injury, Roche said.

If convicted on the murder-for-hire charges, Orlowski faces a maximum sentence of 10 years in prison, to be followed by three years of probation and a $250,000 fine.