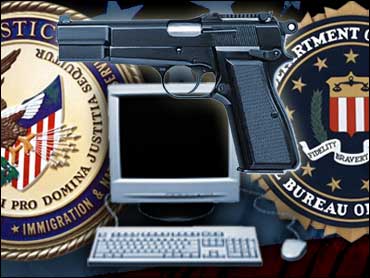 A project to merge immigration and FBI fingerprint databases is running two years behind schedule, meaning some suspected foreign terrorists and criminals may be slipping across U.S. borders, a new Justice Department report says.

Until the project is finished, immigration, FBI and other law enforcement officials will not be able simultaneously check fingerprint records and some foreigners "who should be detained will not be," said the report Friday by Glenn A. Fine, the Justice Department's inspector general.

"The slow progress of the integration project represents an unacceptable risk to public safety and national security," Fine wrote.

The delays are particularly troubling, the report said, because interim changes have led to fingerprint matches of 4,820 foreigners suspected of or wanted for criminal offenses since January 2002. Of those, 50 were being sought for murder.

The project, begun in 1999, now is not expected to be finished until at least 2009, about two years later than originally thought. One reason is that after the terrorist attacks of Sept. 11, 2001, resources and manpower were diverted to build a stricter border entry and exit registration system.

Even so, the report concluded that the Justice Department had not come up with a new schedule for completing the work and hadn't adequately planned for the takeover of immigration duties by the new Department of Homeland Security.

Justice officials, the report said, now face "a major challenge" in attempting to run the project between the two agencies.

In a written response, Paul Corts, assistant attorney general for administration, said the project is being done "as expeditiously as possible" and rejected implications that it has been in limbo. He said software for the project has been vastly improved, for example.

"Significant progress has been made," Corts said.