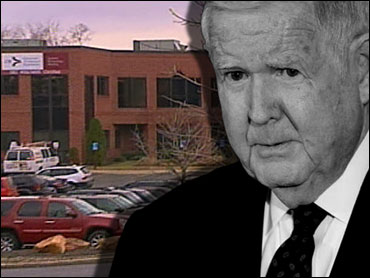 CBS News has learned the FBI is investigating a little-known not-for-profit organization called Commonwealth Research Institute. It's located, like a lot of Rep. John Murtha's, D-Pa., pet projects, in his hometown, Johnstown, Pa.

Commonwealth gets the same benefits as the Salvation Army or any other charity: It doesn't have to pay taxes. But its line of work may be surprising. It's a defense contractor.

"There's a lot of tests to being a charity, and just saying, 'Well I'm doing research paid for by the government," said Zerbe, " - if that were the case, I would have 10,000 companies that would tomorrow be a charity."

If Commonwealth were not a charity, it could owe roughly one-third of its profits in taxes. That could add up to millions, on more than $45 million dollars in government contracts. But it pays nothing.

Documents show when Commonwealth was formed, company officials touted their connections to "the local Congressman" Murtha.

According to a letter from the IRS to Commonwealth dated August 1, 2000, the agency questioned the officials on their application for charitable status. "(M)erely because an organization conducts research does not mean it will qualify for exempt status," wrote the IRS official.

The IRS also noted, "Research results must be made available to the interested public within a reasonably short time after completion of the project." The IRS concluded, "We do not believe the information provided thus far clearly distinguishes you from a commercial research company which makes its services available to the general marketplace."

Commonwealth officials responded in a Dec. 3, 2000 letter saying they anticipated their research would be for the "Department of Defense, Justice Department, National Science Foundation or the National Institute of Health (sic)." Commonwealth officials told the IRS that they may have some classified work but that only, "some small portion (10-20 percent) of the work completed will be restricted [from publication] for good reason."

It was partly on that basis that the IRS ultimately granted Commonwealth charitable status.

But nine years later, Commonwealth has apparently not published a single word of its government-backed research.

Murtha's hometown, far from Washington, is an unlikely hub for defense contractors like Commonwealth. But they're in western Pennsylvania because it's Murtha's town, and as chairman of the Defense Appropriations Subcommittee, he has influence over which companies receive billions of tax dollars.

Commonwealth Research gets all of its funding from government contracts. As for what taxpayers get in return, that's hard to say. Commonwealth doesn't have a website and wouldn't tell CBS News how many employees work there or how they have spent millions of tax dollars.

CBS News went to the address listed on Commonwealth's tax records looking for the offices. But a security guard stopped us and our camera crew, saying, "Don't, don't photograph, I'm gonna ask you to get in your car and leave."

A Commonwealth spokesman declined an interview and told CBS News they have "a track record of providing significant value" to the military and that "all" of their work, including a government contract under investigation worth up to $45 million dollars ... is "classified." The Pentagon wouldn't confirm that. A government-run federal spending database notes that at least $14.3 million of the contracts were no-bid.

Tax records show that Commonwealth's top five most highly paid employees make six figure salaries and live all over the country. None were made available to speak with us when we visited Commonwealth's headquarters.

For the biggest hint as to what Commonwealth is all about, it may help to know something about its parent company, Concurrent Technologies. Concurrent is another defense contractor in Johnstown, also registered as a charity at the same address. And, with the help of Murtha and The PMA Group, a lobby firm that's also under FBI investigation, Concurrent has gotten a billion dollars-plus in defense contracts and earmarks.

Concurrent employees have also given Murtha's campaign over $95,000 in donations since 2002.

This isn't the first time Commonwealth has been involved in controversy. Back in 2007, the charity mysteriously paid $26,000 to a Pentagon official who was in between positions at the Pentagon and waiting to be confirmed for a top Air Force procurement position. The official admitted to a Washington Post reporter that he hadn't done any work to earn the Commonwealth payment. Less than three weeks after The Post published an article on the controversy, the official committed suicide.

The incident kicked off an investigation at the Pentagon's Inspector General's office. CBS News has learned that review has been put on hold in light of other active federal investigations into entities connected to John Murtha. Last spring Commonwealth was subpoenaed in a federal investigation into a government defense contract it received that is worth up to $45 million.

One former Commonwealth employee who is now a high-ranking official at the Pentagon declined to answer our questions about what he did for Commonwealth.

In the high-stakes world of defense contracts, it helps to have connections in Congress. Apparently, Commonwealth has one of the best: John Murtha.

At last week's annual defense trade show in Johnstown, Pennsylvania, an Associated Press reporter asked Murtha about another local defense contractor also under investigation, Kuchera Industries. Kuchera was just suspended from getting any new contracts with the U.S. Navy. A Navy spokesperson cited the reason for the suspension as "alleged fraud." CBS News affiliate WTAJ in Altoona captured the exchange.

The reporter asked if Murtha thought his support for Kuchera had been too strong over the years.

"What do you think I'm supposed to oversee these companies? That's the Defense Department's job. It's not my job," Murtha replied.

The reporter followed up asking Murtha if he has hired a lawyer. Murtha replied, "Why have I-what kind of a question is that?"