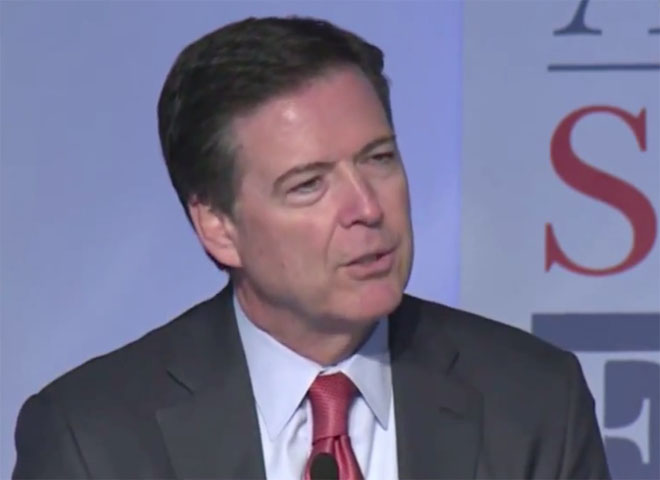 ASPEN, Colorado - The Islamic State of Iraq and Syria's effort to inspire troubled Americans to violence has become more of a terror threat to the U.S. than an external attack by al Qaeda, the FBI director said Wednesday.

FBI Director James Comey told an audience at the Aspen Security Forum that the Islamic State group, which has proclaimed a caliphate in parts of Syria and Iraq, has influenced a significant but unknown number of Americans through a year-long campaign on social media urging Muslims who can't travel to the Middle East to "kill where you are."

Twitter handles affiliated with the group have more than 21,000 English-language followers worldwide, he said, thousands of whom may be U.S. residents.

The FBI Director told his audience that the threat of ISIS on U.S. soil keeps him up at night, and it's a threat that eclipses al Qaeda, CBS News correspondent Paula Reid reports.

Comey said that ISIS (also referred to as ISIL), "is not your parent's al Qaeda. It is a very different model. By virtue of that model it is currently the threat we are worried about in the homeland most of all. ISIL is buzzing on your hip. That message is being pushed all day long, and if you wanna talk to a terrorist, they're right there on Twitter, direct-messaging for you to communicate with."

Hundreds of FBI investigations have been opened, across all 50 states, focusing on targets who have received messages from ISIS and may act upon them.

Comey said that terrorist groups are in the early stages of discussing ways to target Americans with cyber attacks, saying it's a small, but potentially growing problem.

The FBI has arrested a significant number of people over the last eight weeks who had been radicalized, Comey said, without specifying a number. He repeated his previous disclosure, without elaborating, that several people were arrested who were planning attacks related to the July 4th holiday. The bureau has hundreds of investigations pending into such cases across the country.

Abdulazeez's relatives have said he had a history of drug use and depression. Comey noted that "the people the Islamic State is trying to reach are people that al Qaeda would never use as an operative, because they are often unstable, troubled drug users."

Asked if the threat from the Islamic State group had eclipsed that of the rival organization that attacked the U.S. on September 11, 2001, Comey said, "Yes."

The U.S. has tracked dozens of Americans, ranging in age from 18 to 62, who have traveled to Syria or Iraq to fight with the Islamic State group, he said.

"I worry very much about what I can't see," Comey added, because he said Islamic State group recruiters use encrypted communication software to avoid U.S. eavesdropping.

Comey has sounded the alarm about domestic radicalization before, but his remarks Wednesday signal a deepening concern among U.S. officials about the impact of the Islamic State's effort to inspire terrorist violence. As recently as September, senior U.S. intelligence officials were downplaying the group's capacity to attack the U.S. Matt Olsen, then the head of the National Counter Terrorism Center, told Congress in September that the U.S. had "no credible information that ISIL is planning to attack the United States."

Intelligence officials last year were saying they worry most about a mass casualty attack against a U.S. airliner by al Qaeda's Yemen affiliate, or by the Khorasan Group, a cadre of al Qaeda operatives in Syria.

But Comey said Wednesday the threat from the Khorasan Group has been "significantly diminished" by U.S. military strikes.

The Pentagon on Tuesday announced that it had killed the Khorasan Group's leader, Muhsin al-Fadhli, in a July 8 airstrike in Syria.