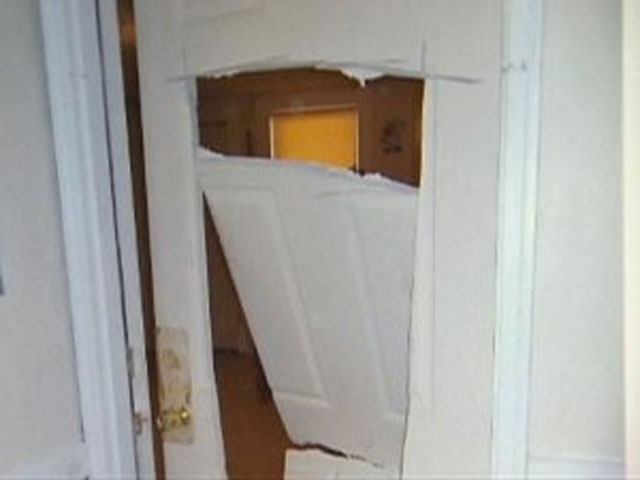 (CBS) FITCHBURG, Mass. - The FBI accidentally raided the wrong apartment last Thursday, cutting through the apartment door of a central Massachusetts woman and her three-year-old daughter with a chainsaw, in a botched effort to seize guns and drugs.

Judy Sanchez lives in apartment 2R, but the suspect the FBI was after lives in 2F.

Sanchez told CBS Boston that at 6:04am, she heard pounding outside her second floor apartment.

"I just happened to glance over and saw this huge chainsaw ripping down the side of my door," she said. "And I was freaking out. I didn't know what was going on."

Within moments, the chainsaw had cut through most of her door, and someone on the FBI's arrest team kicked the rest of it in.

"That's when I heard the clicking of a gun and I heard 'FBI, get down!', so I laid right on down.

Sanchez says the agents told her not to move, so, fearing she'd be shot if she did, she stayed put on the floor while her daughter screamed for her in the other room.

Eventually the feds figured out they were in the wrong place and arrested the right suspect. The raid had been part of a two-year long investigation.

"The looks on their faces when they knew they got the wrong door was priceless," she recalls. "They looked at each other dumbfounded."

Sanchez says an agent came by later to apologize, but it didn't seem genuine.

"For me it felt (like a) routine apology, it felt like just a regular, 'I'm sorry for the inconvenience. Here's the phone number for your landlord to get reimbursed for the door, have a good day.'

And that's how I felt, like it was a smack in the face."