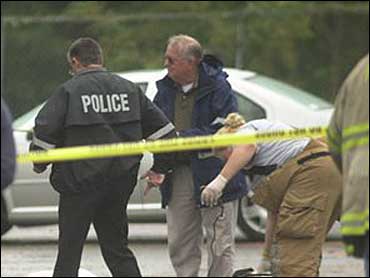 A father and his two sons died Saturday in an apparent murder-suicide at a university, authorities said.

Douglas W. Pennington, 49, shot sons Logan, 26, and Benjamin, 24, before shooting himself with a .38 caliber revolver on the Shepherd University campus, state police said. Both sons were were seniors at the university.

Police said the elder Pennington traveled to the campus to visit his sons, but offered no reason for the shootings. Witnesses said Pennington had not been arguing with his children before the shootings occurred.

The gunfire occurred about 2 p.m. in a parking lot, near residence halls on the campus' west side. The Penningtons were pronounced dead at local medical facilities.

"We are stunned to hear about this terrible tragedy," University President David Dunlop said in a statement. "Our thoughts and prayers are with the families of the victims."

University spokeswoman Valerie Owens described the campus as quieter than usual this weekend because many students have left for the Labor Day holiday. About one quarter of Shepherd's 4,000 students live in campus residence halls and apartments.

University counselors have been talking to students all afternoon and a formal counseling session on campus Saturday evening. Owens had no information on whether any students or faculty witnessed the shootings.

Shepherdstown is about 80 miles northwest of Washington, D.C., in eastern West Virginia.