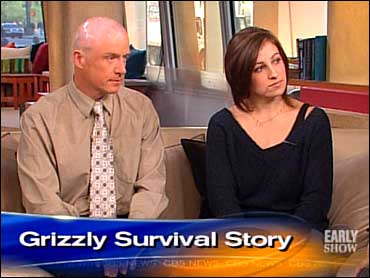 Even though Johan Otter and his daughter Jenna nearly lost their lives when they were hiking in Glacier National Park in Montana and stumbled upon a mother grizzly bear and her two cubs, they recently returned to the scene of the horrific attack.

In September 2005, Johan and Jenna were hiking on a marked trail when Jenna encountered the worst case scenario: A mother grizzly bear with two young cubs.

"It was off of — a cliff was on the side," Jenna Otter told The Early Show co-anchor Harry Smith. "So we come around a rock outcropping and about five feet away from me was a mother grizzly bear and two cubs following it. I remember seeing its eyes open up and — I guess from then it just ran straight into my dad."

The bear instinctively pounced and, likewise, Johan tried to protect his daughter and sustained life-threatening wounds.

"She (Jenna) stepped back. I didn't know why she was stepping back," Johan Otter said. "She had to be in the lead because I kind of lost the trail on an earlier part of the vacation. And I look up and there's this thing running at me. Initially, I think it's a huge badger. Until it lands in my leg and I look down and am like, 'That's a grizzly bear.' It was such a shock and surprise. There was not even any time for fear or pain. You were just like, 'No, now I can't finish this hike.' "

Johan isn't bitter about being attacked by the bear because he understands that she was behaving like a parent should. While he was being attacked, Jenna, who is now in college, had fallen 50 feet down off the cliff.

"Well, I wasn't witnessing the whole event," she said. "At certain points, I blacked out and came back. At one point, I blacked out and I came back in mid-fall, falling off the cliff. I landed on a rocky shelf … And looked up and saw my dad with the bear. But in my mind, think I blocked out the details of — because I guess — I assumed he was just behind a bush. But I remember distinctly seeing his legs but nothing above but I knew the bear was right there. So I, not knowing what to do, just got in a bush, got down into fetal position."

The Glacier National Park is a big tourist attraction and the trail they were on was highly traveled. Johan said they started yelling for help and eventually they were found. The carried back to safety via helicopter.

And last summer, Johan and Jenna decided to hike the same trail again. Their story was chronicled in a two part series in the Los Angeles Times, which will appear in the paper this week.

"It's kind of like a sense of victory," Johan said about revisiting the trail, "being able to conquer both your emotional and physical disabilities in a way. And go back and kind of face it again, see it again, and also be able to share it with my wife was really important."

Palin: "Bigger" Than Obama, or Quitter?