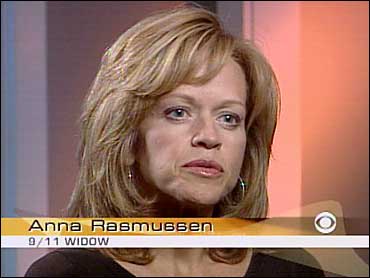 "He was a great man. He was a wonderful dad. … He loved his children. They need to know that, if he had a choice, he'd be here."

Bob died in the World Trade Center's South Tower on 9/11, and Anna faced the prospect of keeping the family going and raising the couple's three young children alone.

But, reported Tracy Smith on The Early Show Monday, "If 9/11 showed the Rasmussens that life could be tragic, what happened in the fall of 2003 proved that it could be cruel."

"Just as we were getting on our feet and really finding our new normal, Sam was diagnosed, October 17, 2003," Rasmussen tells Smith.

Sam was only three when doctors discovered he had Muscular Dystrophy, a terminal disease.

"Sitting in my living room Sept. 11, and hearing Sam's diagnosis on Oct. 17, the weight is the same. It feels so crushing, both those events," Rasmussen says.

Smith asked Rasmussen if she ever asks, "Wny me?"

As things stand today, Smith notes, Sam is unlikely to live past his twenties.

But Rasmussen has a new partner in the battle.

She met Chris Stansbury two years ago and, in July, with their kids all around, the couple eloped.

Stansbury knows he entered a delicate situation, and he has no intention of trying to replace Bob.

"My analogy," he tells Smith, "is, it's like a relay race, and I'm running my part of the race right now, and it's great."

Stansbury brought his son, Adam, to live with the Rasmussens, and Anna's kids love having a bigger family, while embracing Chris as the man in the house.

And Rasmussen says she sees a glimpse of promise in a future that once seemed bleak: "As a parent, to see some of this turning a corner, taking a new direction, putting new opportunities in the lives of these kids, it's great. It's great!"

Rasmussen dedicates all her energy now to raising awareness, and money, for Muscular Dystrophy research. For more on the disease, click here.

1983: Year of Toys for Children and Adults