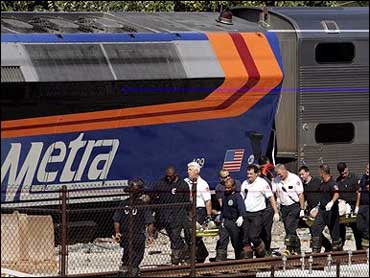 A commuter train derailed Saturday on Chicago's South Side, killing at least two people and injuring more than 80, some of them critically.

The double-decker Metra train was traveling from Joliet to Chicago when the locomotive and its five cars jumped the tracks about 5 miles south of downtown, authorities said.

The Cook County medical examiner's office confirmed the fatality but did not have details. Seventeen of the injured were in serious or critical condition, said Assistant Deputy Fire Commissioner Raymond Orozco.

A total of 189 people, including four crew members, were on the train when it derailed in a neighborhood of homes and businesses. The tracks are on a raised embankment next to a street, but none of the cars fell onto the street. Firefighters had to raise ladders to the track to reach the scene.

Julie Arredondo, who was sitting on the upper deck of the train, said the accident happened with no warning. "Everyone was flying everywhere," she said.

Paul Sterk, a commodities broker at the Chicago Board of Trade, was sitting in the upper level of the third car.

"I've been riding the train for 20 years. You get used to the sound and the motion. I just felt it shift and in a second I grabbed hold of something," he said. "I knew we were off the tracks."

After the accident, there was a 30-foot gap between two of the cars, one of which had severe damage at the front end. The other cars remained upright but had left the tracks.

Richard Hipskind, a railroad accident investigator with the National Transportation Safety Board, said he had surveyed the scene but was waiting for a team of inspectors to arrive from Washington.

All track signals were working when the derailment occurred, said Judy Pardonnet, a spokeswoman for Metra, the commuter rail system that serves the Chicago area. The train had a routine inspection this week, she said.

The speed limit is 15 mph in the area, Pardonnet said. She did not know how fast the train was going.

The engineer has been operating Metra trains for 45 days, following six months of training that included trial runs on the same Joliet-to-Chicago route and more than five years as a CSX Corp. freight train engineer, she said. The engineer, who was "badly shaken," was taken to a hospital for routine drug tests.

There was another accident nearby on the same line two years ago, but Pardonnet said that may have been just a coincidence. "I don't think it's anything specific to this area, but it's still under investigation," she said.