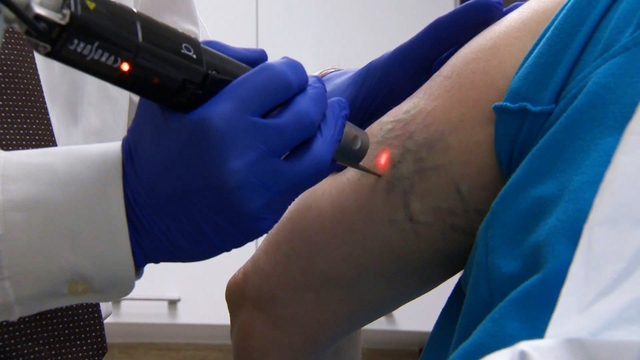 A new form of laser treatment may give hope to people trying to get rid of painful tattoo memories.

The PicoSure is a picoseconds aesthetic laser that can administer short pulses of lasers directly into the skin in just trillionths of a second. Theoretically this means tattoos can be removed with fewer treatments and with less particles from the laser.

"By doing that you're getting a more intense reaction. That destroys the tattoo particles." Dr. Gary Lask, director of dermatologic surgery at UCLA, explained to CBS News.

A Harris Interactive survey revealed that 21 percent of American adults have a tattoo.

Removing tattoos are no easy process. The Food and Drug Administration regulates the laser devices used to remove tattoos. Even though there can be some success with removing tattoos, it still takes many procedures -- sometimes 10 or more sessions while waiting weeks apart -- and can be expensive.

Dr. Michele Green, dermatologist at Lenox Hill Hospital in New York, previously told CBS News that prices can start at $400 for each laser session depending on the size of the tattoo and colors. It takes at least five treatments to remove a simple black tattoo the size of a quarter. You also have to wait between six and eight weeks between each appointment.

Each color requires a different wavelength of laser to remove it. Shades like blue and black might be easier to remove, but oranges and purples can be difficult.

Fifty five-year-old Stuart Yellin is one of the people who regrets his tattoo decision. He got a barbed wire tattoo 11 years ago, which he got at the spur of the moment with his cousin.

After 27 standard laser removal treatments, the barbed wire remained. However, the PicoSure was able to make significant progress with just three months treatments. It cost him $250 to get it, but he's spent almost $10,000 to remove it. The PicoSure alone is $600 a session.

But, for those who are ready to get rid of those inked memories, they're willing to pay the price.

"It's the first new breakthrough for tattoo treatment in about 20 years," Lask said.