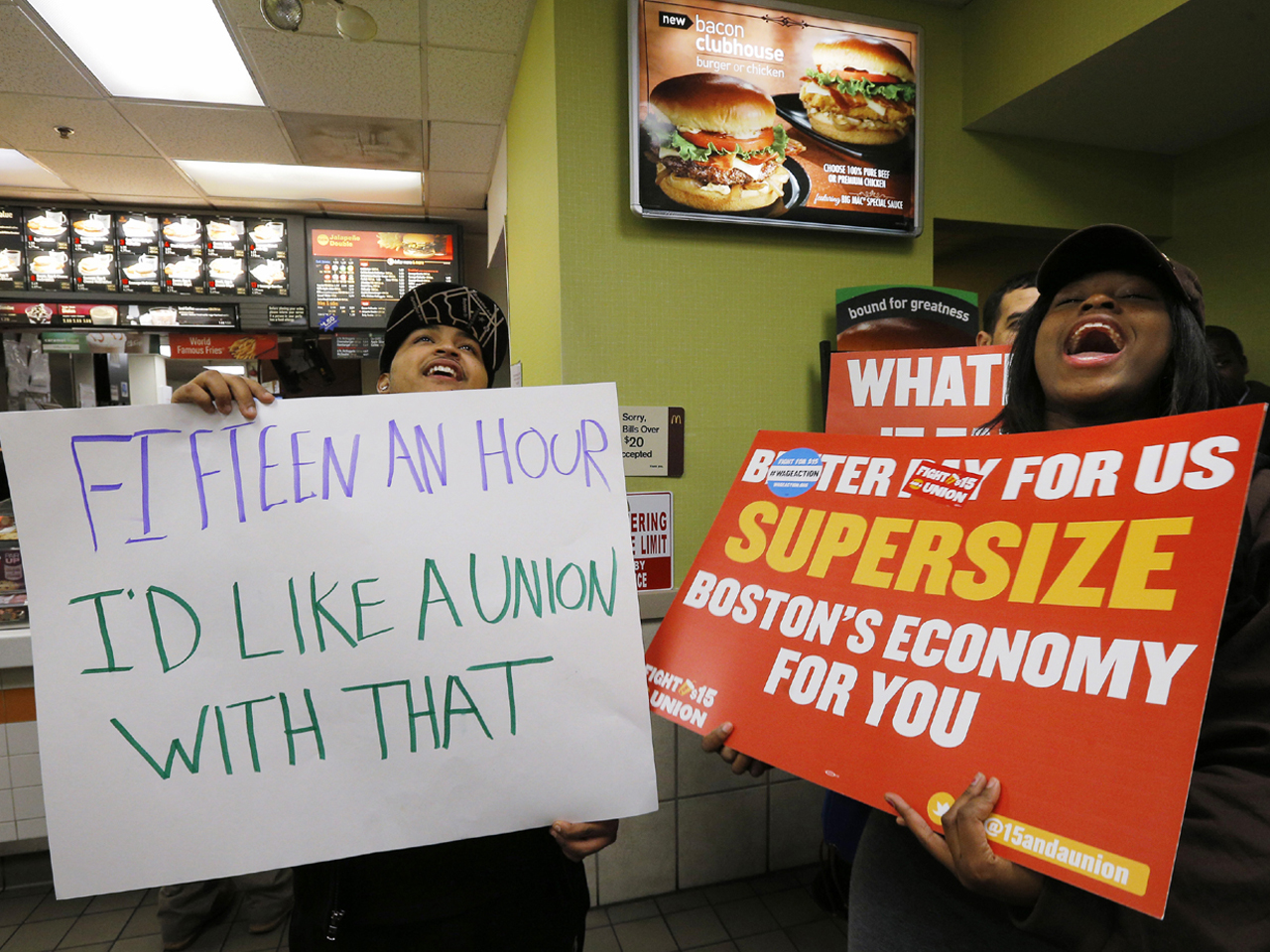 Fast-food workers have walked off their jobs and are protesting in the streets of American cities Thursday, as part of demonstrations demanding their industry's minimum wage be raised to at least $15 an hour, and that they be allowed to unionize.

The "Fight for $15" campaign began two Thanksgivings ago with a strike by several hundred fast-food workers in New York City. Since then, the demonstrations have taken place every few months, and the campaign for a higher minimum wage has expanded. Organizers say they expect strikes in 190 U.S. cities on Thursday.

The Fight for $15 Twitter account showed images from demonstrations underway early Thursday in Chicago, Indianapolis, New York, Philadelphia, Knoxville, Tennessee and other cities. Protests are also expected elsewhere in the Midwest and along the West Coast as the day progresses.

"The Fight for $15 movement is growing as more Americans living on the brink decide to stick together to fight for better pay and an economy that works for all of us, not just the wealthy few," Mary Kay Henry, president of Service Employees International Union (SEIU), a union that's backing the protests, said in a statement on Thursday.

Henry noted that airport and home care workers would also take part in the walk-outs.

The fast-food industry, meanwhile, has questioned the validity of the demonstrations. "National labor groups and their allies have spent millions of dollars on a coordinated campaign to paint an inaccurate and unfair portrait of America's restaurants," the National Restaurant Association said in a statement. "The union-led demonstrations are orchestrated PR events designed to push their own agenda while attacking an industry that provides opportunity to millions of Americans."

"Organizers have admitted that a $15 level was arbitrarily decided and that they are well aware of the industry's narrow profit margins," the statement continued, "that the demonstrations are really just pressure tactics to force restaurants to capitulate on union-organizing demands."

But demonstrators argue that the current federal minimum wage doesn't allow them to pursue the American dream of greater opportunity.

"We can't go out and be lawyers without going to college, and it's hard for us to get to college when our parents can't pay for it because they don't make enough money," a demonstrator identified as Randy from North Philadelphia told CBS radio station KYW Newsradio 1060. "$7.25? I can't pay for my son to go to college. It's hard out here; it's too hard out here."

"I shouldn't have to rely on food stamps or [state assistance programs] in order to make it, in order to pay my bills on time," Ondrea Tate, cashier at a McDonald's in Milwaukee, told CBS MoneyWatch ahead of the demonstrations. "We work hard... but yet our pay doesn't reflect that."

"I'd rather live than survive," 26-year-old Guillermo Lindsay, the night manager at a McDonald's in Minneapolis, said to CBS MoneyWatch on Wednesday. "What about you?"

In Chicago, where local officials recently approved a measure to increase the city's minimum wage to $13 per hour by 2019, demonstrators called on the Illinois General Assembly to approve a $15 an hour minimum wage rate for the state.

Tsedeye Gebreselassie, a senior staff attorney with the National Employment Law Project, says 17 states have taken steps to raise their minimum wage rates over the past two years, in the face of political gridlock by federal lawmakers.

And those campaigns, she tells CBS MoneyWatch, have "really has been galvanized by the fast-food workers' movement, because they actually put income inequality front-and-center in any conversation about what constitutes a healthy economic recovery."

Gebreselassie notes that 70 percent of fast-food workers are over the age of 20. "Many of them are supporting families," she said. "Many of them have college degrees and have been working fast-food jobs for a very long time. It kind of demonstrates the face of our new economy, which is one that is disproportionately being fielded by low-wage, service sector job growth."

One of the reasons this movement has gained momentum, according to Gebreselassie, is the realization by analysts these lower wages are negatively affecting the nation's economic growth. At the same time, she says, more people are identifying with the demands made by the fast-food workers.

"Not just because they support them... but because it's actually affecting them, their families, somebody they know, their neighbor, their kid that just graduated from college," she added. "And these are the only jobs that are available."