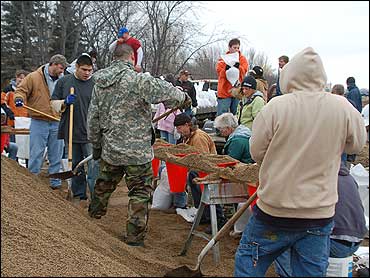 High school and college students were let out of class Monday to help with sandbagging as residents raced to hold off possible flooding on the rising Red River.

City officials planned to fill more than 1 million sandbags, but with more rain forecast they increased the need to nearly 2 million sandbags - about 500,000 each day by the end of the week.

"We're confident that we can get the bags delivered," said Bruce Grubb, Fargo's enterprise director. "Getting them made is a more daunting challenge."

Administrator Pat Zavoral estimated the city was about 40 percent protected as of Monday.

Officials in Fargo, with about 90,000 residents, and across the river in northwestern Minnesota issued urgent pleas Sunday for volunteers to help with sandbagging as a storm increased the flood threat in an area already expected to be swamped by a record crest. Thousands more volunteers may be required, reports KXJB.

Flood stage at Fargo is 18 feet, and the National Weather Service said the Red River had reached 25.3 feet Monday morning. The weather service said the river is expected to crest in Fargo early Friday at around 40 feet - a record.

Officials said a dike protecting downtown Fargo was being raised to about 43 feet and an emergency levee south of the city was being completed.

Fargo is borrowing some expertise from Louisiana. The National Guard and the city plan to bring in seven miles of 4-feet high interlocking plastic containers that can be filled with sand to form temporary dikes, a system that was used during Hurricane Katrina.

"It's collapsable and easy to move," Zavoral said.

Also in Emmons County, 50 to 75 homes were evacuated Sunday night in Linton, a town of about 1,300 south of Bismarck, said county emergency manager Shawna Paul.

About 40 families abandoned their homes in Beulah on Sunday and early Monday, said Mercer County emergency manager Richard Sorenson. County rescuers used a boat to pick up two people from their homes Monday, he said. Beulah is a coal country town of about 3,150 northwest of Bismarck.

"There are no injuries - just a lot of people stressed out and worried," Sorenson said.