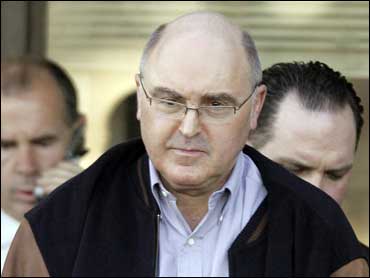 They stayed together for their child's sake, but the arrangement between the Ivy League economics professor and his wife was unraveling.

A violent argument over the 12-year-old girl led the renowned academic to kill his wife just days before Christmas, a few weeks before she planned to move out of the house and end their 16-year marriage.

Rafael Robb, 57, pleaded guilty to voluntary manslaughter Monday, explaining that he picked up a chin-up bar during the fight and beat his wife as she wrapped presents on Dec. 22.

Robb, a tenured economics professor at the University of Pennsylvania, faces a likely prison sentence of 4½ to seven years for bludgeoning his wife, Ellen. The university has asked for his immediate resignation.

Robb testified Monday that he argued with his wife that day about a trip she and their daughter were taking over the holiday break. He did not want the 12-year-old to miss any school.

"We started a discussion about that. The discussion was tense," Robb said. "We were both anxious about it. We both got angry. At one point, Ellen pushed me. ... I just lost it."

Robb said he picked up the bar, which was laying nearby, and repeatedly struck his wife with it.

He later threw the weapon in a trash bin in Philadelphia and tried to make their home look like it had been burglarized. Detectives were suspicious from the start, though, because the scene was poorly staged and nothing was missing.

"I have never seen a burglar beat somebody to death and then not steal anything," Montgomery County District Attorney Bruce Castor said Monday, the day Robb's trial had been scheduled to start.

Robb could have faced a life sentence if convicted of first-degree murder, but Castor felt there were no guarantees given the circumstantial evidence.

The ex-professor pleaded guilty to one count of voluntary manslaughter, which is defined as an intentional, unlawful killing, with provocation, in the heat of passion.

Ellen Robb's brothers, Art Gregory of Haddonfield, N.J., and Gary Gregory of Boston, said their sister suffered verbal abuse throughout the marriage that eroded her self-esteem.

"What kept them there was their undying love for their daughter Olivia," said Art Gregory, who is now raising the girl. "Both of them put Olivia first, beyond anything else, unfortunately to a very tragic end."

The family is starting a foundation in memory of Ellen Robb, a stay-at-home mother remembered for her school volunteer work.

"I hope it can mark the start of the healing process," Art Gregory said. "She was a most amazing individual."

Robb had driven his daughter to school the day of the slaying. He returned home and was getting ready to go to his office at Penn to work on grades when the argument erupted, Robb said.

Ellen Robb, 49, was found dead in the kitchen, near the partially wrapped presents.

Ellen Robb was expecting to get about $4,000 a month in support in a divorce, based on her estimate that his salary was about $200,000, according to evidence at a February pretrial hearing.

Rafael Robb apologized to his daughter, who was not in court, and said he was "very remorseful."

"I know she liked her mother. ... And now she doesn't have a mother," he said, stifling tears.

He talked to his daughter by phone over the weekend and admitted that he was responsible for her mother's death. They have not seen each other since he was arrested in January.

Robb, who has been held without bail, hopes to get out of prison in time to again care for his daughter, defense lawyers Frank DeSimone and Jules Epstein said.

A native of Israel, Robb is an expert in game theory, a complex melding of psychology, human behavior and economics - all aimed at determining what one's adversary will do next. With that background, police said, Robb may have thought he could outsmart them.

Sentencing will likely take place in a few months. As a naturalized U.S. citizen, Robb will not face deportation, his lawyers said.