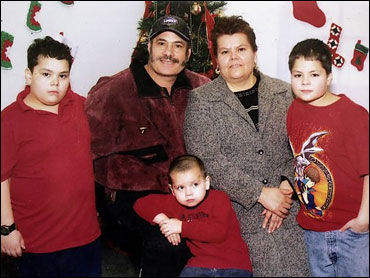 Seven family members, the youngest just 5 years old, were shot to death in their home during what appeared to be a robbery attempt, officials said Friday as police searched for at least two suspects in the attack.

Police reached the house shortly after 10 p.m. Thursday after a witness saw one of the victims being dragged into the home and then heard gunfire.

Inside, officers found three children, ages 5 to 11, dead on a bed and the bodies of four adults scattered inside, police said. All had been shot in what officials described as the city's worst mass killings in decades.

Police were seeking Desmond Turner, 28, of Indianapolis. Sgt. Matthew Mount, a police spokesman, said Turner grew up in the neighborhood but it was unclear whether he knew the family. Turner's criminal history includes time served for pointing a handgun and criminal recklessness.

Police also said they were looking for another suspect, but did not release a name, CBS News reported.

"He'd gone there to rob the home and decided while he was there to execute everybody at the same time, unfortunately," Mount said.

Witnesses told police they saw three or four men running from the back of the house after the shootings, and authorities said they were searching for another suspect.

The seven victims spanned three generations of a family, from 5-year-old Luis Albarran to his grandmother Emma Valdez.

Luis had spent the evening with his grandmother while his mother, Flora Albarran, was out running errands with a friend, police said. Albarran, 22, arrived about 10 p.m. to pick up the boy.

When she walked up to the house and opened the door, her friend saw a light come on and heard Albarran shout: "Don't do that! My child!"

Albarran yelled to her friend not to come in the house, then the friend heard gunshots and screaming, police said in a news release. The friend told police a man holding a long gun stepped onto the porch and the shooting continued inside.

Neighbor Frank Dodson, 49, said Valdez' husband had been at his home earlier that evening and nothing appeared to be wrong.

"They were real friendly people," he said. "You couldn't ask for better neighbors. God, I hate to see this happen."

At the home Friday morning, an iron security door stood open as the officers passed in and out, and a wind chime hung in one window. Police had no history of calls to the home apart from one to check on an alarm.

Neighbors said the area, about a block from the Indiana Women's Prison, had declined in recent years and that drug crimes and muggings had become more common.

"We have been complaining and complaining," said Sandy Washington, 65, who said she had gone to neighborhood meetings to report drugs and prostitution in the area. "Our voices aren't heard."