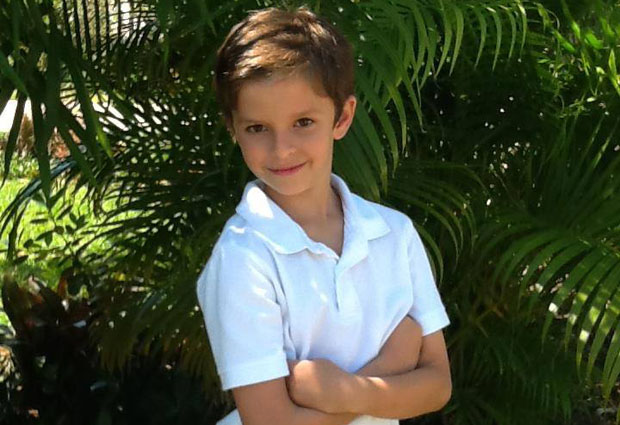 A 10-year-old boy from Florida is fighting to regain control of his limbs and motor skills after he suffered brain damage from what his family says is the result of a home fumigation gone wrong.

Peyton McCaughey and his family became sick shortly after a Terminix subcontractor, Sunland Pest Control, treated their home for termites on August 14, the family's attorney told CNN. The family was given clearance to return to the house two days later.

While the rest of the family recovered, Peyton's condition got worse. "He began to lose his ability to stand on his own and speak," Peyton's uncle Ed Gribben writes on the family's GoFundMe page.

Suspecting that he was poisoned by the termite treatment chemicals, the family rushed Peyton to a local hospital where he spent 10 days in the intensive care unit. He has since been transferred to another children's hospital for treatment.

"A recent MRI suggests there is brain damage," the post on the fundraising site says. "He is unable to control his limbs. He has uncontrollable twitching and flopping. He is unable to feed himself, but his appetite is improving. His speech is severely compromised. Even though he knows what he wants to say, he cannot control his muscles to speak the words. At times, he becomes very frustrated."

Gribben set up a Facebook and GoFundMe page to help raise money for Peyton's care. "It takes both parents and grandparents to be with him Peyton 24 hours a day, and the absence of income will soon become a big problem," he writes. "The funds raised will be used for family expenses such as travel, hotels, food, lost time at work, and other needs."

The Florida Department of Agriculture and Consumer Services said it is investigating Sunland Pest Control Services in collaboration with the EPA and the Department of Health.

"We are aware of the tragic and heartbreaking incident involving Peyton," the agriculture and consumer services department said in a statement. "While our investigation is ongoing, we are issuing a Stop Work Order prohibiting Sunland Pest Control Services from conducting any fumigations at this time."

Terminix gave the following statement to CNN: "We were saddened to learn of this and our hearts are with the family. We are carefully reviewing the matter."

This isn't the first time Terminix has faced accusations involving fumigation injuries. Earlier this year, a family vacationing in the U.S. Virgin Islands was hospitalized after they were exposed to the toxic chemical methyl bromide at their resort. The pesticide is banned in residential settings in the United States.

The Department of Justice and the Environmental Protection Agency are investigating.

As for Peyton, CBS affiliate WPEC reports he got a visit from three Miami Dolphins players over the weekend to boost his spirits.

And Gribben said the family remains hopeful. "He seems to have retained his personality and cognitive skills. Being young, he may be able to reroute the messages through other parts of his brain to regain some of his motor skills. But, he has to relearn them through a lengthy process consisting of daily physical and occupational therapy. It has become apparent that it will be much longer than weeks; but, hopefully it will be months, not years, of recovery time."