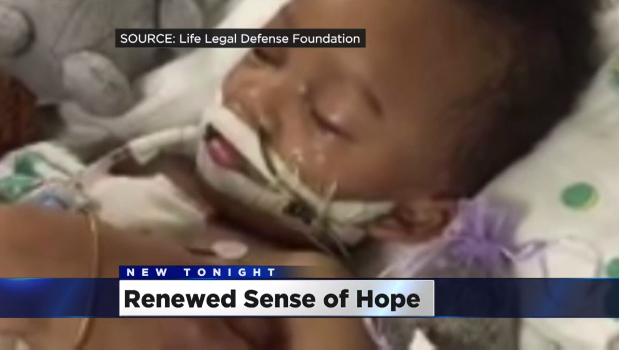 It's given a renewed sense of hope to a family whose toddler son was declared brain dead: a woman in the Bay Area is still alive a year after she was pronounced brain dead.

Two San Francisco neurologists determined that the 29-year-old woman, Anahita Meshkin, did not meet the clinical criteria for brain death, CBS Sacramento reports. She remains in a coma.

Now, her story is being cited by the parents of 2-year-old Israel Stinson, who was determined to be brain dead by two hospitals. Israel was being treated for an asthma attack in early April when he went into cardiac arrest. Doctors were unable to revive him despite 40 minutes of CPR, the Sacramento Bee reported. Repeated neurological exams showed he was brain-dead.

The families are going through heartbreaking situations, and though they don't know each other, the fact that Meshkin remains alive is giving Israel's parents some hope.

"I'm not the only parent who would fight for their child," Israel's mom Jonee Stinson said.

The Stinson family is fighting in court to stop the Kaiser Permanente Medical Center in Roseville from disconnecting Israel from life support.

"It does make me hopeful, but it's still frustrating, that they haven't declared my son alive," she said.

Mohammad Meshkin, Anahita's dad, never gave up even though she's been comatose for nearly a decade after suffering a massive seizure while battling anorexia. She remains hooked up to machines at a care facility.

"I can can only imagine what the dad is feeling. His daughter is still fighting for her life," Stinson said.

But time is running out for the Stinsons. They have until Friday to have their case heard by the 9th Circuit Court of Appeals, after lower courts rejected their claim, or to find a new hospital willing to keep their son on life support.

"I've just been calling hospitals night and day, praying like crazy that a hospital will accept us," Stinson said.