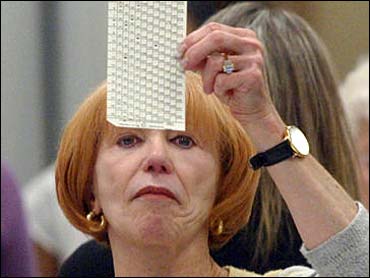 Machines malfunctioned, tempers flared and edgy voters often waited hours Tuesday to pick a president in a contentious race watched by thousands of monitors who expected the worst.

But by the close of East Coast and Midwest polls, only scattered local snafus had been reported in an election turnout that shaped up to be the heaviest in years.

And those voters deserve most of the credit for things going smoothly, said Doug Chapin, director of the nonpartisan Election Reform Information Project.

"At the end of the day it came down to the voters, and they stood in the rain, they asked questions, they went to court," Chapin said. "And voters came through in a way that even the most optimistic of us hadn't expected. ...We know of no major meltdowns anywhere along the lines some people were worried about."

About 50 percent of all voters said they were very certain ballots in their state would be accurately counted, according to a national Associated Press exit poll conducted by Edison Media Research and Mitofsky International.

But such problems appeared to have been quickly solved in some areas. "There's been nothing systemic, nothing that seems to be widespread," said Matt Brix, director of Common Cause New Mexico.

Despite all the lawyers, election-rights activists and partisan voting monitors who descended on polls across the country intent on uncovering voter fraud, the biggest complaint appeared to be long lines that forced voters to wait hours, in queues that circled buildings and wound down streets.

The extremely high turnout, and massive voter-registration efforts by Democrats and Republicans, were considered the cause.

Well after polls had closed in some states, voters still waiting in long lines became restless.

"They were getting a little rowdy," Bridgeport, Conn., Sgt. Nick Meriano said late Tuesday night. "It's under control now. People were in line a couple hours."

Hundreds of people waited in lines more than three hours after polls closed Tuesday night in hotly contested Ohio, where elections officials took extra voting machines to some precincts to try to speed things up and volunteers passed out hot chocolate to warm voters waiting in cold rain.

Many elections officials said people still in line at the poll closing time of 7:30 p.m. would be allowed to vote.

Hyper-vigilance appeared to be the order of the day, which in some states prompted poll closures and unfounded complaints.

In New Jersey, for example, a suspicious substance later determined to be spilled salt prompted the two-hour closure of a Mount Laurel precinct. In Pennsylvania, zealous GOP election monitors complained that some Philadelphia voting machines already had thousands of recorded votes when the polls opened at 7 a.m.

Local election officials quickly explained that voting machines registered every vote ever cast on them — like mileage on a car odometer — and that did not constitute evidence of fraud.

A Democratic source tells CBS News Republicans filed a federal lawsuit in the eastern district of Pennsylvania asking for more time to count absentee ballots from Philadelphia because they have not had sufficient time to validate the absentee voters.

Pensylvania Republicans tell CBS News the Philadelphia Board of Elections has be ordered to provide a list of those who have requested absentee ballots. The case will be argued Wednesday morning. The Republicans say the ballots may not be opened or canvassed in the meantime.

Democrats there say there are 13,000 ballots at issue -- and in closely contested state, with slim margin of victory -- they could make the difference in declaring a winner.

In Colorado, Republican Party officials said a lawyer for the Democrats showed up at an Eagle County precinct with a list of registered GOP voters, planning to challenge them all. Democrats acknowledged it was true.

In other closely contested states — including Iowa and Michigan — the liberal group MoveOn.org was accused of disrupting local precincts.

In Ohio, a woman filed a lawsuit on behalf of voters who didn't receive absentee ballots on time, asking they be allowed to cast provisional ballots. Later, a Toledo federal judge granted her request.

Also in Michigan, the NAACP filed a Justice Department complaint, saying it received 35 complaints that GOP poll watchers were harassing voters in Detroit.

CBS News Legal Analyst Jonathan Turley notes that many legal actions taken Tuesday were "designed to preserve issues in anticipation of litigation if the election is close. ...When one looks at the entire picture, there is collectively much more litigation (being) reported. The campaigns have been very skillful in slowly filing these actions to avoid the appearance of lawyering the election.

"There is a significant and comprehensive range of litigation. Some of it is meritless but some of these issues have bite."

A Democratic official in Cleveland claimed he was thrown out of a church basement by a screaming poll judge. Another judge allowed him to return.

In Florida, two Bush supporters filed a lawsuit seeking at least $15,000 in damages, claiming they were punched, pushed, shoved and spat on when they showed up at a Halloween rally for Democratic candidate John Kerry, dressed as giant flip-flops.

New touch-screen voting machines, criticized by computer scientists and several elections officials as susceptible to hacking and malfunction, were used Tuesday in 29 states and the District of Columbia. Only Nevada has mandated the machines produce paper receipts, which could make recounts more reliable.

In Florida, which gave the 2000 election to George W. Bush on the basis of 537 votes, 10 touch-screen voting machines failed at various precincts in Broward County. Nearly half the state's voters were using the ATM-like machines.

In New Orleans, problems with electronic machines, some of which did not boot up, forced precinct workers to tell voters they would have to come back, said voting activists.

"New Orleans wins the award for the worst voting situation in the country when it comes from electronic voting machines," said Cindy Cohn, legal director of the Electronic Frontier Foundation.

Provisional ballots, new this election, also prompted disaster fears because they could delay any recount efforts. Any voter whose name does not appear on precinct rolls is entitled to cast a provisional — or paper — ballot. But elections officials must individually certify them as being cast by registered voters before they can be counted.

Some polling stations in the important swing state of Pennsylvania saw provisional ballots run out. Precincts scattered across the state stayed open past the scheduled closing time of 8 p.m. because of huge lines.

Provisional ballots also ran out in New Mexico, and were quickly replaced by election officials.

The complicated issue of counting absentee ballots also added to the confusing array of new machines and new state voting regulations prompted by the debacle of the last race for the White House.

States have differing and confusing rules about deadlines for such ballots. Some states, for example, allow absentee votes to be counted days after the election, provided they are postmarked by Nov. 2. Others mandate that mailed ballots received after Election Day do not count.

And in more than a dozen states, election officials missed the recommended deadline for mailing absentee ballots overseas, meaning soldiers risking their lives in Iraq and Afghanistan might not get them in time to vote.

The Florida ACLU filed suit in U.S. District on Tuesday on behalf of three voters who received their absentee ballots in the mail today and but don't have the same opportunity as overseas voters to have them counted if they go into the mail today.