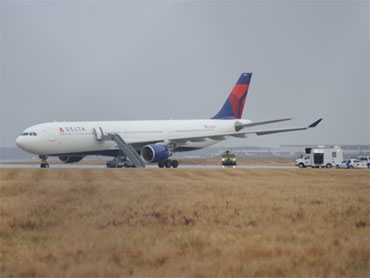 U.S. counterterrorism officials are scrambling to assess a potential new threat from an explosive mixture that evaded detection aboard a Detroit-bound airliner but .

The suspect, identified by multiple law enforcement officials as a Nigerian man named Umar Farouk Abdulmutallab, claimed to have ties to al Qaeda. But while investigators try to determine the veracity of his claims, they also want to figure out exactly how the explosive device was made - and how much of a broader threat it may pose to air security.

A high-ranking law enforcement official told CBS News that the suspect apparently used a syringe to inject a chemical into powder - - located near his groin, a technique not seen in previous attempted attacks. It's possible, the source said, that this incident was a test of whether the materials could pass screening and how effective they might be at causing damage.

In 2006, investigators in London uncovered a plot to use liquid-based explosives disguised in drink bottles to blow up airliners. The case prompted new restrictions on passengers carrying beverages or other liquids.

Now investigators are trying to determine whether the rules need to be tightened again, concerned that the components of the explosive device were smuggled onto the plane despite technological advances in screening and detection.

"It raises some serious questions, such as how was this person able to bring an explosive substance aboard a commercial airliner?" said Sen. Susan Collins of Maine, the senior Republican on the Senate Homeland Security Committee.

The explosive material burned but apparently did not produce enough of an explosion or fire to bring down the Airbus 330 carrying 278 passengers and a crew of 11.

The incident marks the first time someone onboard a U.S. plane had sought to detonate a bomb since Richard Reid hid explosives in his shoes on a trans-Atlantic flight on Dec. 22, 2001 - almost exactly eight years before the newest incident. Reid is currently serving a life sentence.

In Friday's case in Detroit, no charges were filed immediately against the suspect, who was taken to a hospital with burns to his legs.

One law enforcement official, also speaking on condition of anonymity in order to discuss the case, said Abdulmutallab's name had surfaced earlier on at least one U.S. intelligence database, but not to the extent that he was placed on a watch list or a no-fly list.

Mutallab also had "significant UK links" and was "most probably radicalized" there, a British counter-terrorism official told CBS News.

In a bare-bones statement about the incident, Delta, which is acquiring Northwest, said the passenger caused a disturbance, was subdued, and the crew requested law enforcement meet the flight.

Law enforcement officials said they had no preholiday intelligence indicating this type of attack was in the works.

The FBI and the Homeland Security Department issued an intelligence note on Nov. 20 about the threat picture for the 2009 holiday season from Thanksgiving through Jan. 1. At the time, intelligence officials said they had no specific information about attack plans by al Qaeda or other terrorist groups. The intelligence note was obtained by The Associated Press.

President Barack Obama was notified of the incident and discussed it with security officials, the White House said. Officials said he was monitoring the situation and receiving regular updates from his vacation spot in Hawaii.

The White House was coordinating briefings for the president through the Homeland Security Department, the Transportation Security Administration and the FBI.

Federal officials said there would be heightened security for both domestic and international flights at airports across the country, but the intensified levels likely would be "layered," differing from location to location depending on alerts, security concerns and other factors.

The department encouraged travelers to be observant and aware of their surroundings and report any suspicious behavior to law enforcement officials.