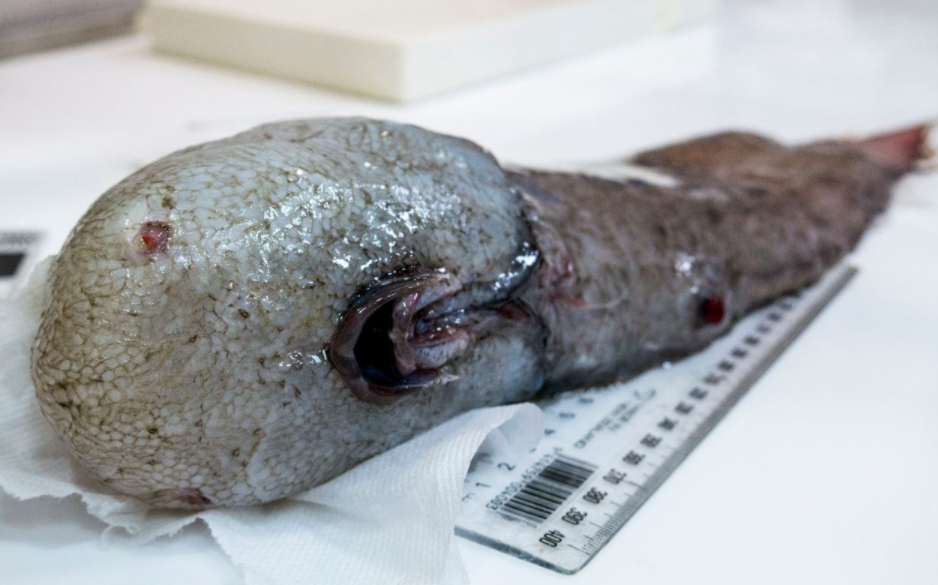 While exploring the depths of a massive abyss off the coast of Australia over the weekend, a group of scientists came upon an odd-looking creature — a large, faceless fish.

The brownish white fish was unrecognizable, without eyes or anything that resembled gills.

A group of 40 scientists from Museums Victoria and the Australian government's Commonwealth Scientific and Industrial Research Organisation (CSIRO), who are traveling on a research vessel for a month-long journey that began on May 15, caught the creature in the Jervis Bay Commonwealth Marine Reserve some 13,000 feet below the surface. The temperature of the water was barely above freezing.

"Everyone was amazed," one CSIRO scientist described in a blog post Tuesday. "We fishos thought we'd hit the jackpot, especially as we had no idea what is was."

They sent in tissue samples and emailed several images of the mystery fish to experts who work on abyssal fishes.

"We even conjured up possible new scientific names," an enthusiastic CSIRO scientist added.

Then eel expert John Pogonoski, who works for CSIRO's Australian National Fish Collection, examined the fish while onboard the vessel and shared some shocking news with the crew — the fish wasn't a new species after all.

It's actually a cusk eel with the scientific name Typhlonus nasus, which is derived from Greek, meaning "blind hake."

"So, it's not a new species, but it's still an incredibly exciting find, and we think ours is the largest one seen so far," CSIRO explained in the blog post.

The fish, which scientists dubbed the "Faceless Cusk," has not been spotted in the area for more than a century.

Dr. Tim O'Hara, the chief scientist and expedition leader for CSIRO, told The Guardian it was the first time the fish had been seen in waters off Australia since 1873, when one was dredged up by a British ship near Papua New Guinea.

According to CSIRO, the Faceless Cusk is known from the Arabian Sea, Indonesia, Papua New Guinea, Japan and Hawaii. Living at depths between 13,000 to 14,000 feet, it's a rare sight.

"This little fish looks amazing because the mouth is actually situated at the bottom of the animal so, when you look side-on, you can't see any eyes, you can't see any nose or gills or mouth," O'Hara told The Guardian. "It looks like two rear-ends on a fish, really."

The faceless fish went viral on Facebook and Twitter this week — with thousands of people sharing photos of the 17-inch-long sea creature.

"If he only knew how famous he'd become, imagine the look on his face! Oh...wait," CSIRO joked on Twitter Wednesday.

While the Faceless Cusk was a great catch, O'Hara said it just one of many unique creatures the team expects to find during their voyage.

"Scientists expect to find a range of animals, including new species, of fish, starfish, molluscs, crabs, sponges, marine worms and sea spiders," O'Hara said in statement online. "The data gathered on this trip will be crucial to understanding Australia's deep-sea habitats, their biodiversity and the ecological processes that sustain them."