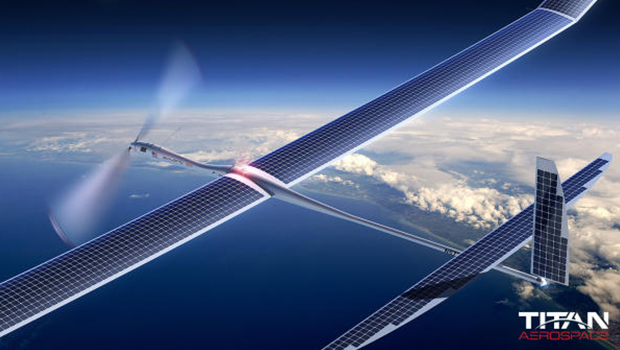 In its on-going efforts to bring affordable Internet access to more than 5 billion people worldwide who can't afford it or don't have access, Facebook is now looking into buying a drone company.

As reported by TechCrunch, the social network is in talks to acquire Titan Aerospace, which manufactures "near-orbital, solar-powered drones" that can fly for up to five years without needing to land. Tech Crunch's anonymous source said the deal is expected to be worth $60 million.

Facebook would use the drones to provide Internet access as part of its commitment to the Internet.org initiative, which Facebook CEO and founder Mark Zuckerberg discussed at last week's Mobile World Congress.

The inside source says Facebook would start by building 11,000 of the company's "Solara 60" model drones.

Launched at night using internal battery power, these drones soak up enough energy from the sun to ascend to about 12.5 miles above sea level (that's more than 3 miles above commercial and military jets). There, they can fly for five years without refueling or landing.

As the company's video explains, these drones are a less expensive and more versatile version of an orbital satellite. They hold the potential to help in disaster relief and storm monitoring, but it is their communications capabilities that most interest Facebook.
If the acquisition goes through, all of Titan Aerospace's production and manufacturing would henceforth be dedicated to Internet.org, according to the source.
Other tech companies are also looking into innovative ways to bring Internet access to all. Google's "Project Loon" calls for WiFi-enhanced weather balloons, rather than drones, to provide better access.
View CBS News In
CBS News App Open
Chrome Safari Continue
Be the first to know
Get browser notifications for breaking news, live events, and exclusive reporting.