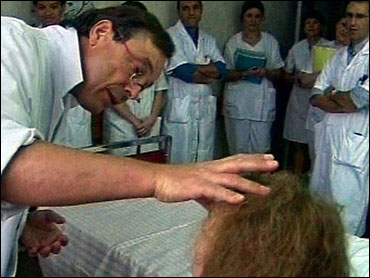 The first post-surgery words of a woman who underwent the world's first partial face transplant were "Thank you," one of her doctors said Friday.

"There were no post-surgical problems," he said at doctors' first news conference on the French transplant that has set off a debate among scientists over ethics.

"The patient was awake at the 24th hour and ... her first word was 'merci,'" Devauchelle said. Behind him were projected images of the facial portions that were transplanted — a section of the nose, lips and chin.

The director of the hospital in Amiens, northern France, where the transplant was carried out last Sunday said the surgery was required because the recipient's case was exceptional.

The 38-year-old woman, whose identity has not been disclosed, was mauled by a dog in May, leaving her with severe facial injuries that her doctors said made it difficult for her to speak and eat.

However, the French news agency AFP quotes her daughter as saying the 38-year-old woman lost part of her face following a suicide attempt.
The family dog apparently used its jaws to try to wake her after she took an overdose of sleeping pills.

The donor was a brain-dead woman.

"It's like any other organ transplant where you have a willing donor family kind enough to recognize the need of a recipient who is missing a critical structure," said Dr. Peter Costantino, an expert on facial reconstructive surgery at St. Luke's-Roosevelt Hospital Center on CBS News' The Early Show. "In this case, instead of it being a liver or kidney, it's the large portion of a woman's face."

Leading transplant surgeon Jean-Michel Dubernard acknowledged that he had initial reservations in the planning stages of the surgery. But he added that when he saw the extent of the woman's disfigurement, "I no longer hesitated for a second."

Carine Camby, director-general of the agency under the French health ministry that coordinates organ procurement said the woman was warned that she risked becoming a center of media attention because the surgery was a world's first.

It's likely she will remain on medication for the rest of her life.

"There are some techniques that may become available in the future but right now, yes," Costantino told Early Show co-anchor Julie Chen.

The patient will not end up looking like the donor, because of her underlying bone structure, but she will also not look like herself.

However, "she was looking at a new person the day after the dog took her face," Costantino said.

That's part of the controversy, reports CBS News correspondent Sheila MacVicar. Such surgery speaks directly to the issue of identity. Some specialists argue other reconstructive techniques might have been more ethical, and question what would have happened if the transplant had failed.

"The outcome then would probably be worse than what you've got before you started," said Dr. Timothy Miller, chief of plastic surgery at UCLA.

Carine Camby, director-general of the agency under the French health ministry that coordinates organ procurement, said normal reconstructive surgery could not have been used in this case.

"It is precisely because there was no way to restore the functions of this patient by normal plastic surgery that we attempted this transplant," Camby said. "She could no longer eat normally, she had great difficulty speaking and there is no possibility with plastic surgery today to repair the muscles around the mouth which allow people to articulate when they speak and not spit out food when they eat."

However, a surgeon involved in the advance evaluation of the case suggested traditional techniques may not have been impossible.

The hand transplant recipient later had it amputated. Doctors said the man failed to take the required drugs and his body rejected the limb.

Dr. Laurent Lantieri, an adviser to the French medical ethics panel, said he feared this operation could turn out like that first hand transplant if the patient is psychologically unstable.

Dr. Jean-Pierre Chavoin, secretary general of the French society of plastic surgery, noted that Lantieri had planned to do a face transplant himself but was beaten to it.