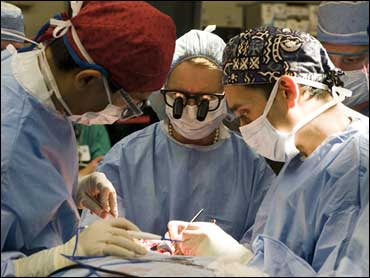 The severely disfigured woman who received the nation's first face transplant left the hospital in Cleveland Thursday night, able to eat solid food and breathe on her own for the first time in several years.

"I'm happy about myself," she told her doctors.

Hospital officials would not say where the patient went. She and her family have declined requests for comment, and her identity has not been revealed.

The woman suffered a traumatic injury several years ago that left her with no nose, palate, or way to eat or breathe normally. In a 22-hour procedure, 80 percent of her face was replaced with bone, muscles, nerves, skin and blood vessels from a dead donor.

It was the fourth partial face transplant in the world, though the others were not as extensive.

Her recovery has been astonishing, Siemionow said. She shows no signs of rejecting her new face and can breathe normally instead of through a hole in her windpipe.

A couple weeks ago, she ate pizza for the first time in years.

"She can actually feel the new face, and she does not feel the difference between her old face and her new face," Siemionow said.

"Before surgery, she couldn't smell at all," the surgeon said. Now, "she can recognize perfumes, she can eat and smell her hamburger ... she can drink her coffee from the cup."

Most surprising to doctors, who thought a transplanted face would never be able to do this: "She can wink her eye," Siemionow said.

She likely even could go out in public and not be recognized as a face transplant recipient, because her face appears fairly normal other than a little swollen, Siemionow said.

"The scars are nicely hidden because it's such a large transplant," she said.

The woman must return a couple of times a week for follow-up care.

The world's first partial face transplant was performed in France in 2005 on a 38-year-old woman who had been mauled by her dog. Isabelle Dinoire received a new nose, chin and lips from a brain-dead donor. She has done so astoundingly well that surgeons have become more comfortable with a radical operation considered unthinkable a decade ago.

Last month, CBS News correspondent Sheila MacVicar reported that Dinoire says she is still struggling to come to terms with what she sees in the mirror every day.

Dinoire said in a November interview that "it takes an awful lot of time to get used to someone else's face. It's a peculiar type of transplant."