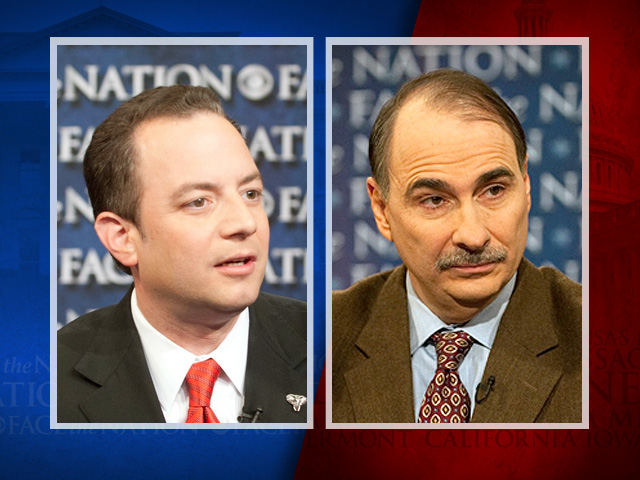 On CBS News' "Face the Nation " Sunday, a top campaign adviser to President Obama, David Axelrod, and the head of the Republican National Committee, Reince Priebus, went back and forth over an issue that is looking to be critical this campaign season: gas prices. CBS News looked into some of the claims each made.

David Axelrod: "In June of 2008, the price of gas was four dollars and ten cents a gallon."

The cost of gas in June of 2008, the early stages of the heavy summer driving season and during the presidential campaign, was $4.10 per gallon. The 2008 gas crisis hit its peak one month later with prices averaging $4.11 per gallon.

By August, the cost fell to $3.74 and continued to fall until the price averaged $2.07 just after Election Day in November, when Mr. Obama was elected president.

Reince Priebus: "He's defending a president that had-- gas prices were a dollar eighty-five a gallon when he took over."

The cost of gas was $1.84 just six days after President Obama's inauguration. As noted above, that is far cheaper than the cost of a gallon of gas six months prior in July 2008. Gas prices have the ability to fluctuate quickly.

David Axelrod on Keystone XL pipeline from Canada to refineries in the Gulf Coast: "The State Department said they needed more time to evaluate the project and all of its implications, including what it would mean for the Water aquifers in-- in Nebraska."

The State Department announced in January that it was not going to move forward with the Keystone XL pipeline for now, saying that it needs more time to evaluate the impact of the project.

As Axelrod noted, one area of contention over the approval of the Keystone XL pipeline is the Ogallala Aquifer in Nebraska which supplies the Midwest with water for drinking and farming. Dave Heineman, the Republican governor of Nebraska, worked to change the route of the pipeline to avoid the aquifer and the Nebraska legislature called for an environmental assessment of an alternate route.

In January, Heineman called on the president to move forward with the pipeline while assuring him that his state would determine a viable route. Meanwhile, TransCanada, the company to build the pipeline, said it will propose an alternate route soon that considers Nebraska's concerns.

Reince Priebus: "The Republicans have been in favor of this Keystone pipeline (that will create) twenty thousand jobs."

Supporters of the Keystone pipeline from the tar sands in Western Canada to the refineries in the Gulf Coast say the project would create 20,000 jobs, including the U.S. Chamber of Commerce. However, the U.S. State Department estimated it would create 5,000 - 6,000 jobs and some analysis say the number isn't that high, including a report by the Cornell University Global Labor Institute that found up to 1,400 temporary construction jobs would be created.

David Axelrod: "But understand this president has approved dozens of pipelines. He is going to speak this week about another spur from Oklahoma to the Gulf so we can relieve a glut of oil that we have and get it down to refineries there."

The president is traveling to Oklahoma (as well as Nevada and New Mexico) this week and will discuss energy production.

After the Obama administration rejected the Keystone XL project, TransCanada, the behind the pipeline, said it was moving forward with a portion of the pipeline that doesn't need State Department approval (because it doesn't cross international borders.) The approval of oil pipelines that cross state lines consist of a combination of state and federal approval processes.

The White House welcomed TransCanada's announcement to build the pipeline from Cushing, Oklahoma to the Gulf Coast. The president said he supports the project because it "will help address the bottleneck of oil in Cushing that has resulted in large part from increased domestic oil production."

Axelrod: "And we've freed up tens of-- of millions of new acres for exploration and-- and for oil production in the future."

In January, the president announced the that 38 million acres for oil drilling and exploration in the Gulf of Mexico and the sale is expected to begin in June 20.

The announcement is not a new proposal but is part of a five-year plan that was first implemented in 2007, during the Bush administration. The Obama administration, through Interior Secretary Ken Salazar, announced in 2010 that the administration would move forward with drilling and exploration in parts of Alaska, the Gulf of Mexico and the Mid-Atlantic.

Source: Department of Interior list of sales for offshore drilling and exploration

However, after the 2010 BP oil spill, the Obama administration instituted a temporary moratorium that was later lifted in parts of Alaska and the Gulf Coast. The administration has maintained its drilling and exploration ban in the Mid-Atlantic, citing the need for more environmental impact studies.

The first post-moratorium opportunity for the industry to buy leases was in December 2011 and the June sale is the last opportunity for industry to buy leases to drill until the next five-year plan is implemented in 2013. The administration said it will continue exploration and drilling in the Gulf Coast and parts of Alaska but has not committed to opening federal waters off the Atlantic and Pacific coasts, which are areas pro-oil drilling advocates want opened and are among the reasons they frame the Obama administration as anti-drilling.

The president did stop construction of the Keystone pipeline, as described above.

The president later lifted the moratorium but implemented stricter safety measures and regulations. The American Petroleum Institute, the trade group for the oil and gas industry, says that permits for drilling are being issued 40 percent less than before the oil spill.

The president announced in January of 2012 the sale of leases for 38 million acres in the Gulf Coast (also mentioned above).

According to EIA, as mentioned above, crude oil wells both onshore and offshore have increased - 2009 was the first year in decades that domestic oil production rose. The reason is largely due to an increased in offshore oil drilling and the production of tight oil, which is obtained through onshore shale rock.

According to EIA, the production of tight oil has tripled in the past three years to about 900 thousand barrels per day as of November 2011, largely in North Dakota, Texas and Montana, but much of the production is on state and private lands and not land controlled by the federal government.

President Bush did lift a presidential prohibition on drilling off the East and West coasts in 2008, and Congress followed suit and lifted their ban, too. Though Mr. Obama has not allowed drilling in these parts. The president also outlined the five-year offshore oil drilling and exploration plan that began in 2007 (and is mentioned above).

Meanwhile, Jonathan Cogan, spokesperson EIA said there is a "myriad of factors" that impact energy production and supply, including decreased demand due to a slow economy and changes to consumer behavior, as well as increased use of domestic biofuels and domestic production.

Although it's difficult to place blame or praise, supply is up and demand is down.

A June 2011 EIA study notes that the U.S. imported 49 percent of its petroleum in 2010, which is "dramatically" less than the U.S.'s peak level of oil imports in 2005, when imports of crude topped 60 percent because consumption was at its peak and domestic oil production was low.

David Axelrod: Oil production is "up twelve percent since he's been president."

According to the U.S. Energy Information Administration (EIA), the independent analytical arm of the Department of Energy, at the end of 2011, there were 23,503 crude oil wells in operation. That number is higher than 16,633 wells at the end of 2008. The peak number of oil-producing wells was in 1985 with more than 35,000 wells.

The number of drilling rigs to in operation to open up a well is also higher now than it was in 2008. According to EIA, there were 379 crude oil rigs in 2008, compared with 980 at the end of 2011, the most since 1990 when online records became available.

However, the Institute for Energy Research (IER), an industry-backed group, says oil production is up because of production increases on private and state lands, not because of actions by the federal government. Though the IER says federal oil production was down in 2011 from 2010, the organization's analysis shows that federal lands produced more oil the past two years since at least 2006.

David Axelrod: "And we're producing more gas than ever before."

Although 2011 and 2010 saw the highest levels of natural gas production in more than 35 years, the amount has fluctuated little over the past four decades. The mid 1980s saw the lowest levels of natural gas production with 17,270 billion cubic feet per year in 1985, but consumption was also at its lowest level, too. In the first 11 months of 2011, the United States produced 22,030 billion cubic feet of natural gas, which is the first year since 1985 the U.S. consumed less than it produced.

Axelrod: "We've doubled the use of renewable energy, wind and solar, biofuels."