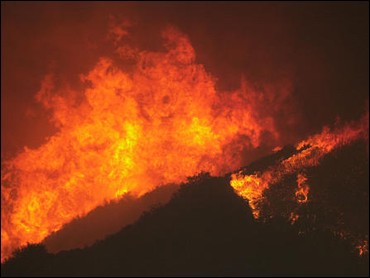 Drought- and beetle-ravaged trees in this mountain community stick up like matchsticks in the San Bernardino National Forest, bypassed by the fires still smoldering, but left like kindling for the next big blaze.

Welcome to the future.

"You're really going to increase the chances of and prevalence of fire," said Susan Ustin, a professor of environmental and resource science at the University of California, Davis.

Warmer, windier weather and longer, drier summers would mean higher firefighting costs and greater loss of lives and property, according to researchers at the Lawrence Berkeley National Laboratory and the U.S. Forest Service.

Both the number of out-of-control fires and the acreage burned are likely to increase — more than doubling losses in some regions, they say in a study set for publication in the scientific journal Climatic Change.

While the study examined Northern California, "the concern for Southern California would be much higher," because that region is drier for longer periods, said researcher Evan Mills of the Lawrence Berkeley lab.

"Fires may be hotter, move faster, and be more difficult to contain under future climate conditions," Robert Wilkinson of the University of California, Santa Barbara, School of Environmental Science and Management, said in a federal report on the impact of climate change on California. "Extreme temperatures compound the fire risk when other conditions, such as dry fuel and wind, are present."

Where fires once burned without doing much damage to property, Californians have now built homes and entire subdivisions — a problem starkly illustrated by the Southern California blazes.

There are plenty of lessons to be learned, said California Resources Secretary Mary Nichols, who will leave office after this week as Gov. Gray Davis' administration gives way to that of Gov.-elect Arnold Schwarzenegger.

"Certainly in the future we cannot allow construction quite so close to the (fire) zone, and we should create larger buffers" such as the irrigated greenbelt that helped keep fire from Los Angeles County's Stevenson Ranch while other communities were in flames, Nichols said.

Forests need to be cleared of the undergrowth that fed the flames, and the remaining dead, standing trees that still dot the San Bernardino Mountains must be removed, she said.

But that debate has pitted Democrat Davis against the Republican Bush administration, which has sought to allow logging of larger trees to pay for the removal of smaller unmarketable brush and chaparral. The result has been regulatory and legislative impasse.

State lawmakers are requiring the California Department of Forestry and Fire Protection to begin charging rural homeowners for the cost of fire protection, as the state battles its massive budget deficit.

Nichols suggested the state should consider additional "user fees" on development in fire-prone areas. As it is, taxpayers across the nation pay to fight California's wildfires and to reimburse homeowners for their losses.

"If the true cost of fire protection were built into the cost of construction, it would not be as easy or as cheap as it has been to build in the foothills," Nichols said. "I think that would be a good thing."