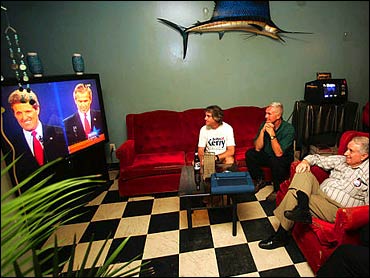 CBSNews.com's David Paul Kuhn reports from the scene of the third presidential debate in Tempe, Ariz.


President Bush had his best showing yet, while Sen. John Kerry performed well enough to likely keep the race neck-and-neck, according to interviews with experts and partisans immediately following Wednesday's third presidential debate.

Though partisans on both sides declared their candidate the winner, what was clear to political analysts was that neither candidate scored a knockout.

But if the 90-minute debate at Arizona State University in Tempe was a draw, Kerry can claim victory for standing toe-to-toe with Mr. Bush throughout the three debates.

"While [this debate] is not going to change a lot of votes, generally a tie in this kind of a setting goes to the challenger," said Norman Ornstein, a political analyst at the American Enterprise Institute. "Just as in the other debates, it was the challenger establishing himself as a safe harbor as president."

But it was a more comfortable, confident President Bush who viewers saw Wednesday night, closer to the man journalists see daily on the campaign trail.

"The first debate everybody expected the incumbent to win because it was on foreign policy," said Shanto Iyengar, a professor of American politics at Stanford University. "This debate everybody thought Kerry would win, but Bush actually did pretty well."

Though on the attack, the president was more tempered than in the earlier face-offs. The anger of the second debate was gone, as were the scowls of debate one.

Even Kerry-Edwards senior adviser Bob Shrum granted that the president, on style at least, was much improved.

"I think that while George Bush was good and warm on the personal questions, especially at the end. I think Senator Kerry was superb on that question," Shrum said.

"Frankly," he added, "it would have had to get better [for Mr. Bush] from the first debate."

"But on the big issues, jobs, where all [Mr. Bush] has is excuses; health care, he didn't explain how his health care plan would work," Shrum said. "These fundamental issues, the minimum wage, equal pay for women, those issues actually matter to a huge number of issues in this country."

All agreed this debate showed clear contrasts on policy.

"I thought Kerry scored some points on jobs. I thought the agenda favored Kerry," said Iyengar. "I thought it was very closely contested. Because of expectations Bush did better."

After being judged the loser in the first two face-offs, Mr. Bush unrelentingly attacked his opponent on Wednesday. Using the words "Massachusetts liberal" as a pejorative, Mr. Bush attempted to paint Kerry as out of touch with the average American.

Dour may be a bit much, but the Democrat did look a bit sedate. He spoke quietly at times, his gestures were stiffer.

"I thought that Bush stylistically was much less frantic and more measured than he had been in the previous two debates and he clearly found some topics – education, immigration and faith – where he was comfortable," said William Galston, director of the University of Maryland Center for Information and Research on Civic Learning and Engagement.

But on the salient domestic issues, experts claimed Kerry spoke best to the middle class.

"I think where Bush was less effective was conveying a sense that he had plans to deal with job creation or health care," Galston said. "Given the importance that voters, particularly voters in a lot of swing states, attach to those two issues … they did not hear from the president what they wanted to."

When asked if he would overturn Roe v. Wade, the case that legalized abortion, President Bush did not answer. Though he did say he would not utilize a "litmus test" in appointing judges, implying he would make appointments regardless of their stance on abortion.

Kerry replied by stating flatly that he would not appoint judges who are against constitutional rights, including the right to abortion.

"There are obviously stark differences on some of these issues, like abortion," Ornstein said.

Moderated by CBS News' Bob Schieffer, the debate was acerbic and combative from the outset.

At times, Mr. Bush mocked Kerry. Following one of Kerry's answers, the president said "Whoo," and exhaled emphatically, suggesting that Kerry was droning on with "misstatements."

But Charles Cook, editor of the nonpartisan Cook Political Report, said he saw no clear winner.

"The first debate did make the big difference," Cook continued. "It recalibrated [following the debates], the race to roughly even. And I'll leave it up to the polls to judge whether there was winner. It is best for us to step back and see what people think."