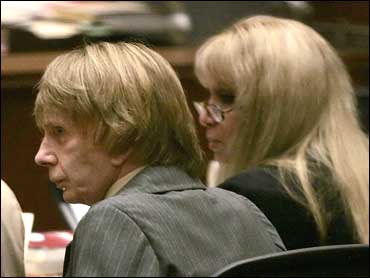 Spattered blood on his white jacket shows Phil Spector was probably standing within a few feet of actress Lana Clarkson with his arms raised when she was shot to death in his mansion, a forensic expert testified Thursday.

That opinion, offered by Sheriff's Department criminalist Lynne Herold in Spector's murder trial, is expected to come under attack by the defense, which maintains that the evidence points to Spector being six feet away from Clarkson — too far away to have shot her. The defense claims Clarkson, found slumped in a chair, fired the gun into her own mouth.

Herold, who said she is an expert in blood spatter and fiber analysis, showed jurors hugely magnified bits of blood so tiny they would not be visible without a high-powered microscope.

"Most of the bloodstains on the jacket are mistlike," she said. "You can barely see them."

But magnified 60 times, she said they showed that, "That piece of fabric was within two to three feet of the bloodletting event." She spoke of "high-velocity backspatter" and showed jurors where spots were left on the front, back and left sleeve cuff of Spector's woolen jacket.

She also said the jacket was on Clarkson's right side and was "forward-facing and the arms had to be raised so the spatter could get on the back."

Clarkson, 40, a struggling actress best known for her starring role in "Barbarian Queen," was shot through the mouth on Feb. 3, 2003, after going home with Spector from her job as a hostess at the House of Blues nightclub. Spector, 67, a legendary music producer who gained fame in the 1960s with his "Wall of Sound" recording technique, had been out on the town that night and met Clarkson for the first time. He invited her to his mansion after closing time for a drink.

Seeking to recreate the scene, Herold also offered analysis of bloodstains on Spector's pants and a piece of bloody cloth found in a nearby bathroom as well as blood smearing on the death gun.

"Something bloody came in contact with the inside of the left pants pocket," she said and suggested it could have come from placing the gun in the pants pocket and taking it out.

"There is smeared blood," she said as she viewed photos of the snub-nose .38-caliber revolver that killed Clarkson. "It indicates to me there was some movement. There are places on the gun that would show some of the blood was moved or removed."

"Could that be a product of someone wiping the gun off?" asked Jackson.

"That is one possible mechanism," she said. She also said that a bloody cloth found in the bathroom had been saturated with water.

Herold is considered the prosecution's most important witness on forensic evidence and she gave jurors an extensive rundown on her professional associations, experience and awards.