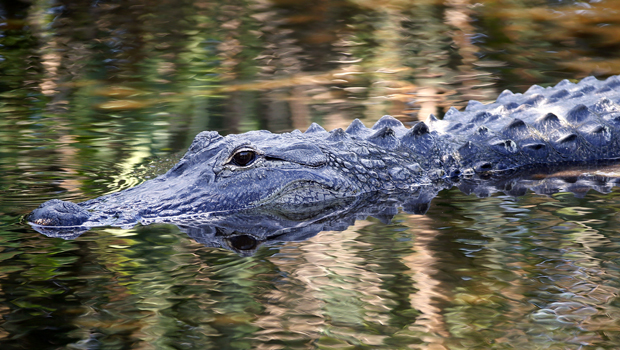 On Tuesday night, a 2-year-old boy was playing at Disney's Seven Seas Lagoon in Orlando, Florida when an alligator dragged him into the water. His parents reportedly attempted to pry their son from the reptile's jaws to no avail. The body of the little boy, Lane Graves, was found the following day.

Florida is home to an estimated 1.3 million gators. They grow to an average adult size of 8.2 ft for female alligators and 11.2 ft for males, according to the Smithsonian National Zoological Park. (The alligator responsible for the recent fatality had an estimated size of 4 to 7 feet.) Despite their large numbers in the Sunshine State, experts say that alligator attacks on humans are rare -- there have only been 24 fatal alligator attacks in Florida since the Florida Fish and Wildlife Conservation Commission began keeping records in 1948.

"Alligator incidents involving people are fairly uncommon and it's usually a case of mistaken identity," Jim Darlington, curator of reptiles at St. Augustine Alligator Farm Zoological Park in Florida, told CBS News. "If someone is splashing in cloudy water the animals can't see what's disturbing the water so sometimes they bite first and ask questions later."

The nocturnal reptiles will eat mostly anything they can capture including fish, turtles, frogs, birds and small mammals like rabbits and raccoons.

To attack prey, gators remain camouflaged in the water with only their eyes peering above the surface. They're ambush hunters, so they wait for something to swim or walk by and then lunge towards it at speeds of more than 20 m.p.h. Using their powerful tails, gators can thrust their bodies up to 5 feet out of the water.

Once a gator pounces, it drags the prey underwater to drown it before resurfacing to feed.

The Orange County medical examiner confirmed Thursday that drowning and traumatic injuries were the cause of death of Graves, whose body was found intact.

Wildlife experts agree that people should never approach an alligator or attempt to feed it. It is against the law in Florida to feed alligators; feeding them has the effect of making them less afraid of humans.

Also, avoid swimming in fresh bodies of water from dusk to dawn because gators are most active during these times of day. And always remain close to children whenever they are near open water.

If you find yourself face-to-face with a gator, however, Darlington offers some tips on what to do:

Humans, on average, can outrun gators on land. "They are not made for running after prey," Darlington said. You should be fine once you are 20 or 30 feet from the reptile and Darlington said it is safe to take pictures or observe the animal from a distance.

PUT UP A FIGHT

Gators are designed for grabbing things that don't want to be grabbed, but if you put up a big enough struggle, Darlington is confident that the gator will retreat. "Your size is what saves you from these things," he said. "They don't like people."

When asked if it would help to punch the gator in the snout or the eyes, Darlington said that was "malarkey" and doubts that anyone would be so coordinated during a gator attack.

Alligators generally try to avoid people. The thinking goes that the more ruckus you make, the less likely gators are to come nearby. "If there's a lot of human activity, gators like to stay offshore and stay away," Darlington told CBS News.