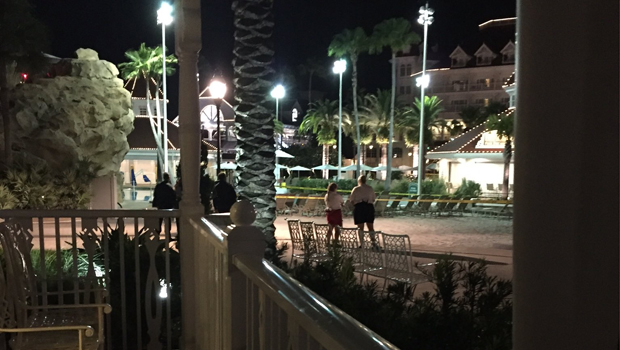 ORLANDO, Fla. -- A search was continuing Wednesday morning for a two-year-old boy snatched by an alligator and dragged into the water Tuesday night at a Walt Disney World hotel here.

CBS Orlando affiliate WKMG-TV reports the incident happened at the Seven Seas Lagoon of the Grand Floridian Resort & Spa at about 9:30.

Orange County Sheriff Jerry Demings told reporters the tot and a sibling have been vacationing at the hotel with their parents, from Nebraska.

He said helicopters, boats and an alligator trapper were taking part in the search. Sonar equipment was brought in. Dive teams were on standby.

Authorities said the effort was still considered a search and rescue operation.

Four alligators were removed from the water overnight and euthanized to look for signs of the boy.

A Disney spokesperson told reporters Disney is "devastated" by the incident.

Demings said witnesses told authorities the boy was with his family, playing in about a foot of water when the gator, described as approximately 4 to 7 feet long, suddenly grabbed him. The boy's father ran into the water to try to help, and his mother may have as well, to no avail, as lifeguards were alerted.

There were "No swimming" signs at the scene, Demings said.