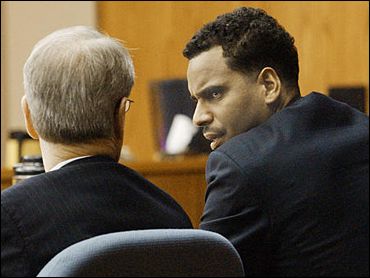 Jayson Williams won key pretrial rulings in his manslaughter case as a state judge refused to allow prosecutors to introduce evidence that the retired NBA star killed his dog with a shotgun and then ordered a witness at gunpoint to bury the animal.

Superior Court Judge Edward M. Coleman also declined to permit the jury to hear about a pistol discharge at the Meadowlands sports complex that resulted in Williams being ordered to make speeches and place advertisements warning of mixing alcohol and firearms.

The defense had opposed the two-pronged motion, with lawyer Joseph A. Hayden Jr. saying, "It is a strategic attempt by the prosecution to smear Mr. Williams in the eyes of the jury and deny him a fair trial."

Assistant Hunterdon County Prosecutor Katharine L. Errickson argued that evidence about Williams' previous carelessness with guns was relevant. "He knew the dangers of guns and alcohol, not from the abstract, but from his own experience in life," she said.

The judge noted the dog incident would be very likely to inflame the jury against Williams and that the Meadowlands incident happened eight years before the shooting for which Williams is on trial.

Williams, 35, faces seven charges, including aggravated manslaughter and witness tampering, that could carry up to 55 years in prison.

The retired New Jersey Nets center is accused of shooting and killing limousine driver Costas "Gus" Christofi at Williams' Hunterdon County mansion on Feb. 14, 2002, then trying to cover up the shotgun shooting. Williams says the shooting at his Alexandria Township home was a tragic accident.

Errickson said the shooting of Zeus, a Rottweiler, took place on Aug. 8 or 9, 2001, between 2 a.m. and 3 a.m., according to a sworn statement from Dwayne Schintzius, a former NBA player who was living at Williams' mansion and working out with him in the hope of making a comeback.

The incident happened after Williams, Schintzius and another friend, Chris Duckery, returned from drinking at the Mountain View Chalet, she said. That is the same restaurant Williams and friends had been at before the Christofi shooting.

Schintzius, in a sworn interview, said he bet Williams $100 that he could drag Zeus out of the house. After Williams accepted, Schintzius pulled the dog outside by his hind legs, the prosecutor said.

Williams went upstairs and returned with a shotgun. "He blasts one round into the side of the dog, and another into his head, in Schintzius' words, almost decapitating him," Errickson told the judge.

Williams then loaded two more rounds into the shotgun, pointed it at Schintzius, and said, "Shinbone, get this (expletive) dog off my porch, or you're next," the prosecutor said. Schintzius and Duckery complied, and buried the dog, she said.

The other gun incident was in 1994. Williams was charged with reckless endangerment and possession of a weapon after a shot hit the hubcap of an unoccupied security vehicle outside the Meadowlands Arena in East Rutherford. The charges were dropped a year later, after he completed a program for first offenders.