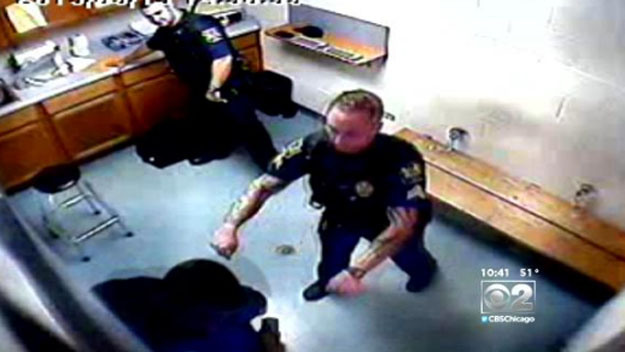 LYNWOOD, Ill. -- A former suburban Chicago police sergeant is being charged for allegedly punching a handcuffed suspect two years ago, knocking the man out and fracturing his nose.

According to CBS Chicago, footage shows Randolph Holmes being beaten in handcuffs at the Lynwood police station in September 2013. Holmes was knocked unconscious and his nose was broken, the station reported.

Fredericksen allegedly struck the suspect in a station garage after an argument and was later fired.

Some critics have said Cook County State's Attorney Anita Alvarez has moved too slowly to charge officers accused of wrongdoing.

Earlier this month, CBS Chicago reported that her office had the surveillance video soon after the incident, more than two years ago.

She's defended her office, which has already been targeted by protesters demanding she resign because she took more than a year to charge a Chicago police officer in the shooting death of Laquan McDonald.