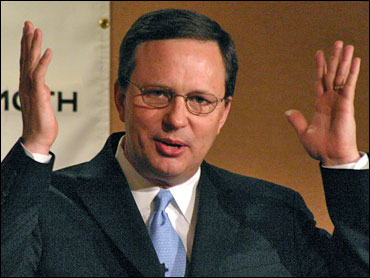 Former FEMA Director Michael Brown has placed blame on everyone from New Orleans' mayor to Louisiana's governor for the chaos following Hurricane Katrina. Now, he's including himself.

Brown said Wednesday he fell short of conveying the magnitude of the disaster wrought by the nation's deadliest hurricane, and calling for help.

"I should have demanded the military sooner," Brown, former head of the Federal Emergency Management Agency, told a gathering of broadcast and National Weather Service meteorologists at a ski resort in the Sierra Nevada.

But Brown, who was relieved from his command in the hurricane region and stepped down from FEMA in September, said it was time to learn from Katrina's aftermath to make things better in the future.

"I think it's important to realize that all of us made mistakes. ... After a while you get a different perspective," Brown told The Associated Press after his speech. "I still do believe that things weren't working too well down there."

Brown said he doesn't want to play the blame game.

"Let's figure out what went wrong and what we can do to make it work better next time," he said. "It may not be a Katrina, but it may be a big wildfire out West next time."

Brown's comments were in contrast to testimony at a congressional hearing in September, when he blamed most of the government's failures on Louisiana Gov. Kathleen Blanco and New Orleans Mayor Ray Nagin, both Democrats. Specifically, he targeted them for failing to evacuate the city, restore order and improve communication.

Before joining FEMA in 2001, Brown was an attorney, held local government posts and headed the International Arabian Horse Association. President Bush appointed him to head the agency in April 2003.

FEMA came under fire immediately after Katrina struck the Louisiana and Mississippi coastlines Aug. 29, killing more than 1,300 people in five states and leaving some 3,200 more unaccounted for.

Brown said his biggest concern was the current emphasis on reorganizing FEMA, particularly in light of past budget cuts that had left hundreds of vacancies in an agency with 2,500 employees while its parent Homeland Security Department thrives.

"It's time to stop organizing and get FEMA back to what it was before, get its budget back up to where it was," he said.