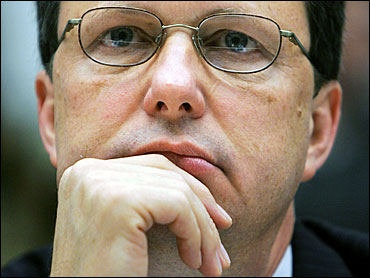 blamed Nagin and Blanco
for a delayed and then uncoordinated evacuation.

"The failure to evacuate... was the tipping point for all of the other things that either went wrong or were exacerbated," Brown said.

Nagin said it was "unbelievable" to hear Brown try to deflect the blame and said that "things spiraled" after FEMA officials made promises that "weren't kept."

Nagin said, "We were saving lives, rescuing people, trying to evacuate them. It was hectic." He said, "the feds, local, state, all across the board, did not have the processes to deal with a storm of this magnitude."

"Obviously, Mr. Brown is maybe under a lot of pressure. I feel kinda sorry for him, I guess," Nagin said.

Brown said that in the days before the storm, he expressed his concerns that "this is going to be a bad one" in phone conversations and e-mails with President Bush, White House chief of staff Andy Card and deputy chief of staff Joe Hagin.

And he blamed the Department of Homeland Security — the parent agency for the Federal Emergency Management Agency — for not acquiring better equipment ahead of the storm.

"I'm happy you left," said Rep. Christopher Shays, R-Conn. "That kind of look in the lights like a deer tells me you weren't capable of doing that job."

"I have come to the conclusion that this administration values loyalty more than anything else ... more than competence or frankly more than the truth," Shays said.

Meanwhile, President Bush and Governor Blanco ignored a reporter's shouted question about Brown as they inspected damage from Hurricane Rita in Louisiana.

Alfonsi reports that while Blanco ignored questions about the President's former appointee, her spokesman spoke up, saying Michael Brown was just not engaged and that "he should have been watching CNN instead of the Disney Channel."

Rep. Gene Taylor, D-Miss., told Brown: "The disconnect was, people thought there was some federal expertise out there. There wasn't. Not from you."

Brown appeared before a special congressional panel set up by House Republican leaders to investigate the catastrophe.

"My biggest mistake was not recognizing by Saturday that Louisiana was dysfunctional," two days before the storm hit, Brown said.

Brown, who for many became a symbol of government failures in the natural disaster that claimed the lives of more than 1,000 people, rejected accusations that he was too inexperienced for the job.

"I've overseen over 150 presidentially-declared disasters. I know what I'm doing, and I think I do a pretty darn good job of it," he said.

"He speaks for himself and he's entitled to his point of view and I don't have anything to add," Chertoff told reporters in Miami.

Brown will remain on the FEMA payroll for two more weeks, advising the agency, said Russ Knocke, spokesman for the Department of Homeland Security.

CBS News correspondent Gloria Borger reports that Knocke told her that technically Brown remains at FEMA as a "contractor" and he is "transitioning out of his job."

The reason he will remain at FEMA about a month after his resignation, said the spokesman, is that the agency wants to get the "proper download of his experience."

Orr reports that it is not clear what Brown is doing but employees publicly and privately let it be known they are not comfortable with him in the building.

Brown joined FEMA in 2001 and ran it for more than two years. He was previously an attorney who held several local government and private posts, including leading the International Arabian Horse Association.

Rep. William Jefferson, D-La. told Brown: "I find it absolutely stunning that this hearing would start out with you, Mr. Brown, laying the blame for FEMA's failings at the feet of the governor of Louisiana and the Mayor of New Orleans."

In a testy exchange, Shays compared Brown's performance unfavorably with that of former New York Mayor Rudolph Giuliani after the Sept. 11, 2001, terror attacks.

"What I wanted you to do is do your job and coordinate," Shays retorted.

"I'm happy to be called not a Rudy Giuliani...a scapegoat ... if it means that FEMA ...is going to be able to be reborn," Brown said.

Criticized by Shays for failing to get better equipment to make communication easier among emergency agencies, Brown blamed those above him.

"We put that money in our budget request and it was removed by the Department of Homeland Security" he said.

Brown said he was "just tired and misspoke" when a television interviewer appeared to be the first to tell him there were desperate residents at the New Orleans Convention Center.

Brown said he learned a day earlier that people were flocking there.

He blamed "a hysteric media" for what he said were unfounded reports of rapes and murders. He characterized blunt-spoken Army Lt. Gen. Russel Honoré, the military coordinator for disaster relief, as "a bull in the China closet, God love him."

And he said Americans themselves must play a more active role in preparing for natural disasters — and not expect more from the government than it can deliver.

Republican Rep. Kay Granger of Texas told Brown: "I don't know how you can sleep at night. You lost the battle."

Brown in his opening statement cited "specific mistakes" in dealing with the storm, and listed just two.

One, he said, was not having more media briefings.

As to the other, he said: "I very strongly personally regret that I was unable to persuade Gov. Blanco and Mayor Nagin to sit down, get over their differences, and work together. I just couldn't pull that off."

Both Blanco and Nagin are Democrats.

Despite the appearance by several Democratic Gulf Coast lawmakers, the hearing was generally boycotted by Democrats, who want an independent investigation conducted into government failures, not one run by congressional Republicans.

Committee Chairman Tom Davis, R-Va., cautioned against too narrowly assigning blame. "At the end of the day, I suspect that we'll find that government at all levels failed," Davis said.

He pushed Brown on what he and his agency should have done to evacuate New Orleans, restore order and improve communication.