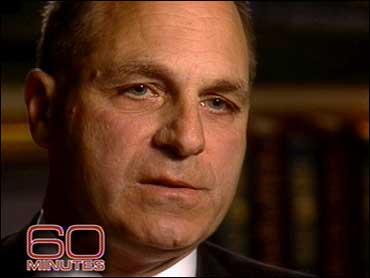 And Freeh spent a controversial eight years as director before he left in June, 2001. But the 9/11 plot was hatched on his watch and he has been criticized by the 9/11 commission for not having his agents more focused on counterterrorism.

But it also turns out that no FBI director had a more strained relationship with the president who had appointed him, than did Louis Freeh with Clinton.

As FBI Director, Freeh rarely sat down one-on-one with reporters. But now he's written a book, My FBI, and speaks out for the first time about his years as director, and his toxic relationship with Bill Clinton.

Here's how he wrote about the former president:

"The problem was with Bill Clinton, the scandals and rumored scandals, the incubating ones and the dying ones never ended. Whatever moral compass the president was consulting was leading him in the wrong direction. His closets were full of skeletons just waiting to burst out."

Freeh says he was preoccupied for eight years with multiple investigations, including Whitewater, Jennifer Flowers and the Monica Lewinsky affair.

He found it deeply awkward and frustrating to be constantly investigating his boss and says it became 'theater of the absurd' when special prosecutor Ken Starr asked him to get a DNA sample from the president to compare with that notorious stain on Lewinsky's dress.

Freeh says the entire scenario of getting a blood sample from the president was like a bad movie.

"Well, we went over to the White House. We did it very carefully, very confidentially," remembers Freeh. The president was attending a scheduled dinner and pretended he had to go to the bathroom. Instead, Clinton went to a room where the FBI had people waiting to take his blood.

Freeh thought Clinton disgraced the presidency; Clinton felt Freeh was out to get him, and that Freeh was an insufferable Boy Scout.

As FBI director, Freeh operated strictly by the book and annoyed the president in his first week on the job when he returned his White House pass after learning the president was under investigation for Whitewater.

"The implications of a White House pass would mean I could go in and out of the building any time I wanted without really being recorded as a visitor," explains Freeh, adding "I wanted all my visits to be official. When I sent the pass back with a note, I had no idea it would antagonize the president. I found out years later that it did."

We were told that relations between the two men had deteriorated so badly, that former Chief of Staff John Podesta says Clinton always referred to the FBI director as 'Effing' Freeh.

Freeh had another reason for wanting to outlast Clinton. It was the 1996 Khobar Towers terrorist attack in Saudi Arabia, where 19 U.S. servicemen died and more than 370 were wounded.

President Clinton had sent the FBI to investigate and promised Americans that those responsible would pay. "The cowards who committed this murderous act must not go unpunished. Let me say it again: we will pursue this. America takes care of our own. Those who did it must not go unpunished," the president said.

But Freeh says the President failed to keep his promise.

The FBI wanted access to the suspects the Saudis had arrested but then-Saudi Ambassador Prince Bandar said the only way to get access to prisoners would be if the president personally asked the crown prince for access.

Freeh says Clinton did not help him. He writes in his book:

"Bill Clinton raised the subject only to tell the crown prince that he understood the Saudi's reluctance to cooperate, and then he hit Abdullah up for a contribution to the Clinton Presidential Library."

It's a strong charge. And 60 Minutes wanted Mr. Clinton's side of all this. He declined to talk to 60 Minutes, but told his spokesman to say: "The assertion that he asked the Saudis for funding for his library while he was president is absolutely false."

And Clinton's former national security advisor, Sandy Berger, told us that Mr. Clinton did press the Saudis to cooperate with the FBI.

Freeh says to get access to the Saudis' suspects, he eventually sought help from another president, the first President Bush. "Former President Bush, at my request interceded with the Saudis, spoke to Crown Prince, now King Abdullah, asked for his assistance and it happened just like that."

The FBI concluded that Iran had orchestrated the Khobar attack, but Freeh said the White House did not want to pursue the prosecution, because Iran had just elected a new president and Clinton hoped to improve relations with Iran.

"I was very disappointed that the political leadership of the United States would tell the families of these 19 heroes that we were going to leave no stone unturned and find the people who killed them, to give that order to the director, because that's the order that I got, and then to do nothing to assist and facilitate that investigation. In fact to undermine it," says Freeh.

But he kept his fury private.

And with the new president's approval on Freeh's last day as FBI director, he announced indictments of those responsible for the Khobar attack, but they're still overseas and out of America's reach.

Freeh told us that in 1993, after the first World Trade Center bombing, he realized the U.S. was in a global war with terrorists.

But then, after Al Qaeda terrorists blew a hole in the U.S.S. Cole and demolished two U.S. Embassies in East Africa, and America did little to retaliate and Freeh writes how frustrated that made him because he believes that not retaliating only encouraged more attacks.

In his book, he writes "America seemed like a lumbering giant stumbling around with a sign on its back reading 'Kick me."

He says the U.S. response to the attempted assassination of the first President Bush by the Iraqi intelligence service was also inadequate.

"We sent a missile into Iraqi intelligence headquarters in Baghdad after working hours. So, we were targeting the custodial staff and not the agents who had tried to kill the president," says Freeh.

He also says the United States lacked the political will and spine to take military action against enemies, because the country was not on a war footing.

The 9/11 Commission had some stinging criticism of Freeh's FBI, saying that though he had made counterterrorism the top priority in 1998, he never shifted manpower accordingly.

"Well, what they're referring to there is the fact that when Congress appropriates FBI resources, particularly FBI agents, the Congress dictates where those people are assigned," explains Freeh, adding that he couldn't assign his own people to the jobs that he felt were most important.

But he acknowledged he could have shifted more agents to counterterrorism, if he had just asked Congress for permission.

On September 11, six percent of FBI personnel were working on counterterrorism, while twice as many agents were assigned to drug enforcement.

And he blames Congress for not giving him the money and manpower he'd been asking for counterterrorism prior to 9/11.

About the FBI's computer system, Freeh writes "We were in the dark ages," and says the average 12-year-old sitting at a desktop PC on the evening of September 10th, 2001 had more computer power at his fingertips than almost any FBI agent had at his work station.

"It's a pathetic record of funding for a program," says Freeh, saying it is not just his record but also the record of Congress and the justice department.

Congress did not trust Freeh with more money for computers because legislators felt he had squandered money he had received for other computer programs. And as for 9/11, the justice department joined the chorus condemning Freeh's computers.

The Department of Justice report said, "The FBI's computer problems prevented agents from connecting the dots before 9/11. Dots that if connected might have prevented the attacks."

Freeh says, "Collecting intelligence information is like trying to drink water out of a fire hydrant. You know, in hindsight it's great. The problem is there's a million dots at the time."

But forget about connecting the dots. Louis Freeh made the surprising revelation that even if the FBI had known that al Qaeda wanted to hijack U.S. planes and fly them into American buildings, the U.S. probably could not have stopped it from happening.

"That's a very, very strong possibility," says Freeh. "For instance, if we had information that al Qaeda operatives were going to hijack planes, then turn them into missiles not in the context of tactical intelligence, which means Mike Wallace is going to get on board flight 462 tomorrow and hijack a plane. That's tactical intelligence. We didn't have that. But if we had intelligence that al Qaeda cells were going to hijack planes, fly them into buildings. Ask yourself in hindsight, you know, what would the United States have been able to do with that information? We could have hardened some of our airports. We could have put in better security. Would we spend the billions of dollars, billions of dollars that we've spent since 9/11 to protect our aircraft, just our aircraft? Would anybody have shut down the airways? Would the President of the United States have said 'I've got that intelligence, it's very dangerous. We'll stop flying planes.' Will we stop flying them for an hour, for a day for two days?"

"I think honestly, most people would say I'm not sure that we could have done anything effective, since we didn't have the will power to do it at the time," says Freeh.

And Freeh told Wallace the question now is: "Do we have the will and the courage to keep going after terrorists before and after attacks, in a war that has no real end?"