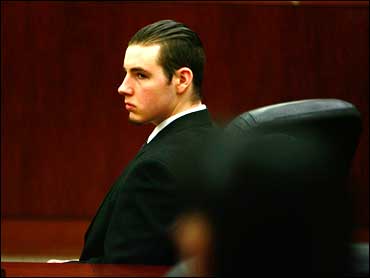 A teenager described as a white supremacist was sentenced Friday to life in prison for savagely beating and sodomizing a Hispanic boy at a drug-fueled party.

David Henry Tuck, 18, was convicted Thursday of aggravated sexual assault in the near-fatal attack. Witnesses testified that he hurled racial insults and shouted "white power" while sodomizing the 17-year-old victim with the plastic pole of a patio umbrella.

Prosecutor Mike Trent told the jury that Tuck's history of violence showed he is beyond rehabilitation and would commit more attacks if released.

"He is an evil person, and he is not going to change or get better," Trent said. "We need protection from him. You are the only ones that provide that."

"Even if you give him life in prison, it will be more mercy than he showed to (the victim) that night," Trent said.

After the jury imposed the sentence, Tuck's mother, Sharon, hugged the victim's mother in the courtroom.

"I am so sorry," Sharon Tuck said as they both cried. She also hugged the victim, whom The Associated Press has not identified because he a juvenile sexual assault victim.

The assault took place at a party in the Houston suburbs where several youths had gathered to drink alcohol and take drugs, including marijuana, cocaine and the anti-anxiety medication Xanax.

According to testimony, the attack was triggered by the victim's drunken pass at a 12-year-old girl and his attempt to steal drugs.

Doctors did not initially expect the boy to live. He was hospitalized for more than three months and underwent 20 to 30 operations. He testified Wednesday that he remembered nothing of the assault.

"I know that justice has to be done. I know a terrible thing happened. Justice needs to be done, but with mercy," Hinton said.

He also said Tuck had an abusive, absent father and was raised by a single working mother. His only role model, Hinton said, was his older brother, a skinhead who is in jail.

Prosecutors presented a chain of witnesses Friday to describe more than a half-dozen other attacks in which Tuck assaulted people, including a Hispanic man who was punched and kicked at a convenience store by three skinheads.

Linda Cabbell, a special education teacher who taught Tuck in elementary school, said he was violent when he was as young as 9 or 10, recalling how he punched her in the eye and kicked her in the groin. Tuck was later expelled.

Tuck will be eligible for parole in 30 years. The other teen charged in the beating, Keith Robert Turner, 17, is set to go to trial next month.

The victim's father said Tuck should never be released from prison.

"He deserved what he got. This will be with us for the rest of our lives. There's no healing," said the father. The AP has not identified the parents because doing so could identify the victim.