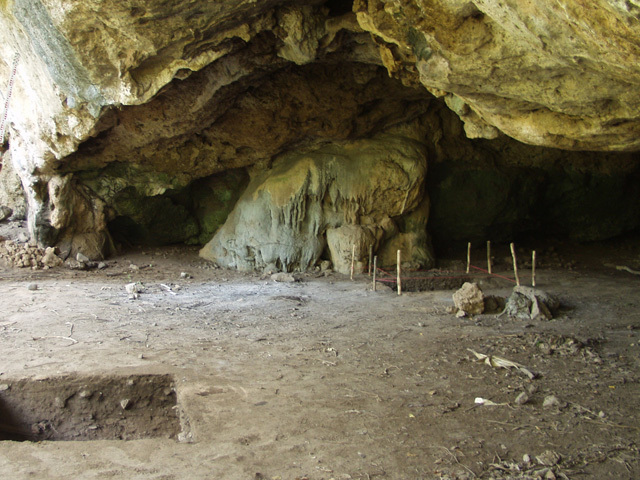 It's one of the oldest human endeavors - and no, not that one. Archeologists say they have discovered an ancient fishhook along with accompanying evidence to support the theory that modern humans were fishing the oceans at least 42,00 years ago.

Fish appeared in the human diet about 1.9 million years ago. Early catchers waded into freshwater lakes and streams without the need for boats or complex tools. It wasn't until later that humans decided to ply the ocean in search of fish.

The latest evidence comes from an excavation on the southeast Asian island of East Timor where remains of tuna and other deep-water fish were uncovered inside a cave. Using dating techniques, a team led by archaeologist Sue O'Connor of Australian National University determined the age to be 42,000 years old -- making it the earliest evidence for ocean fishing.

The results of the excavation were published in the journal Science.

Archeologists working in a limestone cave site in the northern part of East Timor found a couple of broken shell fishhooks, ranging in age between 16,000 and 23,000 years - as well as fish bones which went back 42,000 years. Prior to this finding, scientists said that the most ancient fish hook artifacts dated within the last 10,000 years.

It remains unclear how the fish were caught but since catching tuna and marine fish requires tools and advance planning, this meant people must have developed the mental and technological know-how to exploit the sea.

"Well, they must have been attached with strong fiber lines of some kind, string, but we really don't know whether they were using this kind of fishing technology at 42,000 years ago," Chris Clarkson, a senior lecturer at the University of Queensland, told the online publication The World Today. "They may well have been out in boats with nets. They may have been spear fishing but certainly by sort of 20,000 years ago it seems that they were using strong, fibre lines and probably hand casting or dangling these fish hooks off the edge of some kind of boat."

Scientists believe that the early anglers probably fashioned boats by tying logs together and used nets and sharpened pieces of wood or shells as hooks.

"These people were smart," said Kathlyn Stewart, a research scientist at the Canadian Museum of Nature, who was not part of the study. "They knew there were fish out there."

It's unclear how far the early mariners ventured. Once the bounty was caught, they likely ate it raw or went back to camp to cook it, Stewart said.

Despite their antique age, the fish bone finding doesn't set a new record. The oldest fish bones, which were found at the Blombos Cave in South Africa, date from 140,000-50,000 years ago.