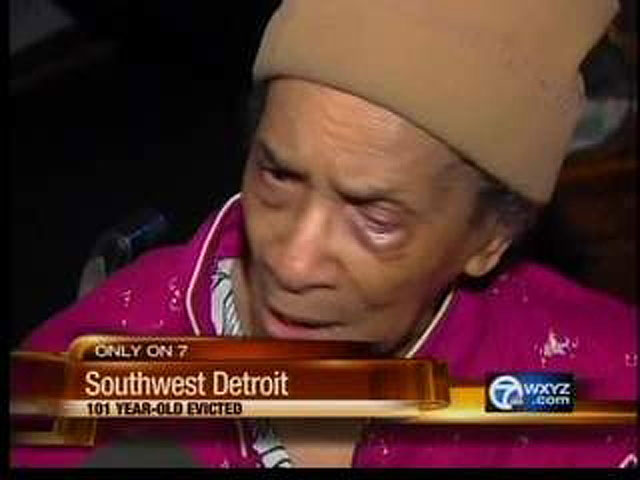 DETROIT - The federal government now says a 101-year-old Detroit woman it promised could move back into her foreclosed home four months ago can't return because the building's unsanitary and unsafe.

Texana Hollis was evicted Sept. 12 and her belongings placed outside after her 65-year-old son failed to pay property taxes linked to a reverse mortgage and the U.S. Department of Housing and Urban Development foreclosed on the home.

Two days later, the department said she could return. But now, HUD said it won't let Hollis move back in because of the house's condition. She had lived there about 60 years.

Department spokesman Brian Sullivan told The Detroit News that an inspection determined the house "was completely unsuitable for a person to live in."

"We can't allow someone to live in that (atmosphere) now that we are essentially the owners of the property," Sullivan said. "The home isn't safe; it's not sanitary. It's certainly not suitable for anyone to live in, especially not a 101-year-old mother."

HUD doesn't want to pay to fix up the house, but Sullivan said the department's seeking other agencies that might help with the work and get Hollis back into her home.

"We're not giving up," Sullivan said. "We're talking with anybody and everybody about solutions to this situation, but the condition of the property is a challenge."

After hearing about her longtime friend's eviction, Pollian Cheeks, 68, offered Hollis a room at her home within a mile of Hollis' house. Hollis, who once taught Cheeks in Sunday school at St. Philip's Lutheran Church, agreed to the invitation and has been staying at Cheeks' house in the meantime.

"Polly's just as nice to me as anybody could be. She goes out of her way to help me," Hollis said, holding back tears. "It's just like living at home, but it's not my home."

Hollis's son took out the reverse mortgage for the $32,000 assessed value of the property, an option that HUD permits for the elderly. HUD took control of the mortgage after the amount paid to the family exceeded the value of the house in 2006.