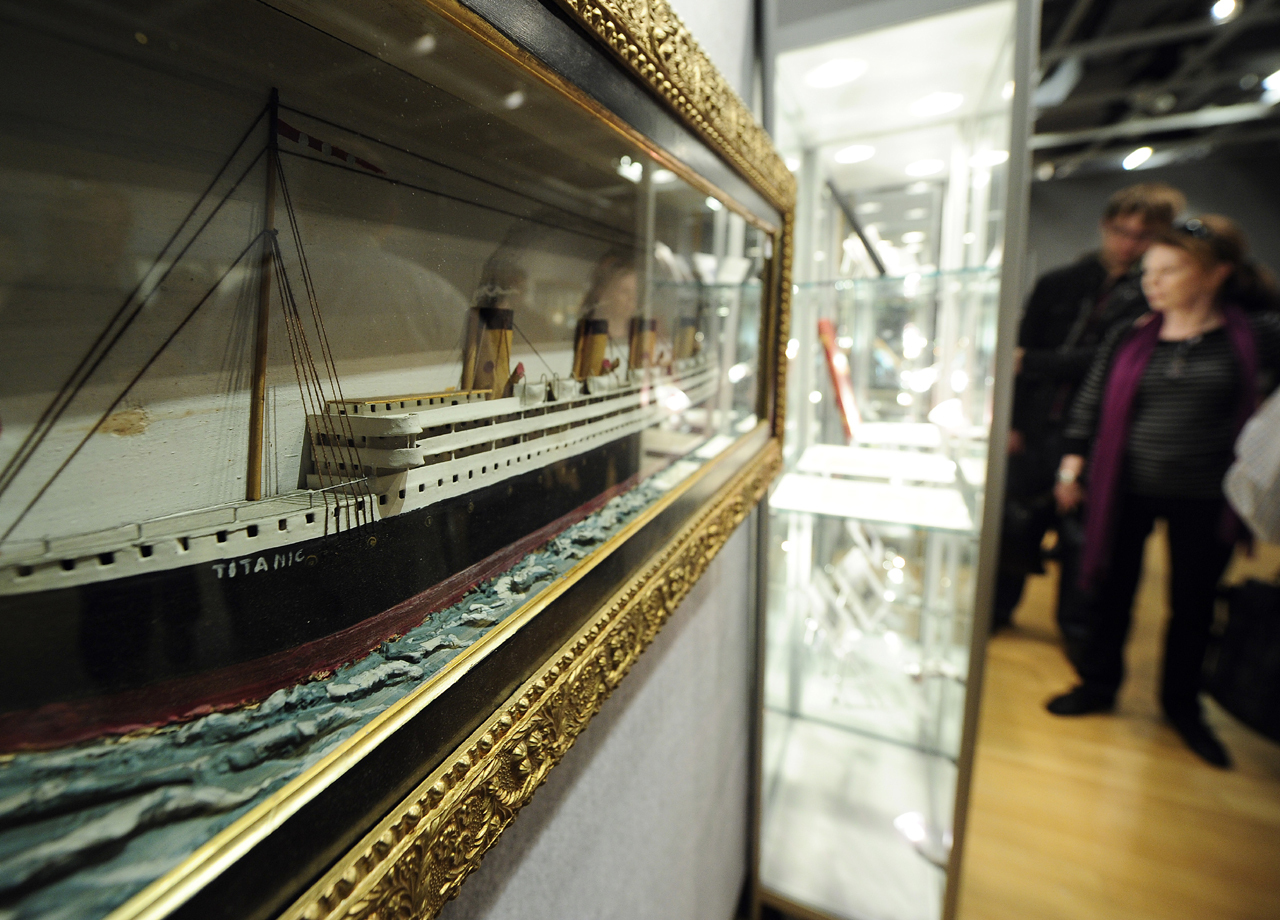 (AP) ABOARD MS BALMORAL - In the birthplace of the Titanic, residents will gather for a choral requiem. In the North Atlantic, above the ship's final resting place, passengers will pray as a band strikes up a hymn and three floral wreaths are cast onto the waves.

A century after the great ship went down with the loss of 1,500 lives, events around the globe are marking a tragedy that retains a titanic grip on the world's imagination — an icon of Edwardian luxury that became, in a few dark hours 100 years ago, an enduring emblem of tragedy.

Helen Edwards, one of 1,309 passengers on memorial cruise aboard the liner Balmoral who have spent the past week steeped in the Titanic's history and symbolism, said Saturday that the story's continuing appeal was due to its strong mixture of romance and tragedy, history and fate.

"(There are) all the factors that came together for the ship to be right there, then, to hit that iceberg. All the stories of the passengers who ended up on the ship," said Edwards, a 62-year-old retiree from Silver Spring, Maryland. "It's just a microcosm of social history, personal histories, nautical histories.

"Romance is an appropriate word right up until the time of the tragedy — the band playing, the clothes. And then there's the tragedy."

The world's largest and most luxurious ocean liner, Titanic was traveling from England to New York, carrying everyone from plutocrats to penniless emigrants, when it struck an iceberg at 11:40 p.m. on April 14, 1912. It sank less than three hours later, with the loss of more than 1,500 of the 2,208 passengers and crew.

Aboard the Balmoral, a cruise ship taking history buffs and descendants of Titanic victims on the route of the doomed voyage, passengers and crew will hold two memorial services at the site of the disaster, 400 miles off the coast of Newfoundland — one marking the time when the ship hit the iceberg, the other the moment it sank below the waves.

At 2:20 a.m. ship's time on Sunday — 0547 GMT or 12:47 a.m. EDT — a minister will lead prayers, floral wreaths will be thrown into the sea and a shipboard band, which has been entertaining guests in the evenings during the cruise, will play "Nearer My God To Thee," the tune the Titanic's band kept up as the vessel went down.

The Rev. Huw Mosford, who will lead the prayers, said he hoped the service would be uplifting.

"It will bring healing, it will bring some form of closure, perhaps — but I think it will also bring hope," he told the BBC.

Edwards will, earlier, hold her own private act of remembrance. She is carrying the ashes of family friend Adam Lackey, a Titanic buff from Montana who died last year, and plans to scatter them at the wreck site.

Some of the passengers on the cruise have a direct link to the ship, through an ancestor who was onboard. Most feel some sort of connection to an event whose ripples have resonated for a century. Edwards said the lives of her grandparents, who married in 1911, were marked by the disaster even though they lived far away in Montana.

"They had talked about going back to Sweden to see his parents, and they didn't because of the Titanic," she said.

The memorial cruise, which left Southampton, England, on April 8, seeks to recreate the experience onboard the Titanic — minus the disaster. Many passengers have dressed in period costume for elaborate balls and a formal dinner recreating the last meal served aboard the ship.

Passengers have enjoyed lectures on Titanic history, as well as the usual cruise-ship recreations of bridge, shuffleboard and lounging in a hot tub.

Another cruise ship, Journey, left New York on Tuesday and will join Balmoral at the site.

In Belfast, Northern Ireland, where Titanic was built — pride of the Harland & Wolff shipyard — thousands were expected to attend a choral requiem at the Anglican St. Anne's Cathedral or a nationally televised concert at the city's Waterfront Hall on Saturday.

The city spent decades scarred by its link to the disaster, but has come to take pride in the feats of engineering and industry involved in building the Titanic.

The memorial concert will feature performances by Bryan Ferry and soul singer Joss Stone, as well as 100 drummers beating out a new percussion work, "Titanic Drums." Actors including Kenneth Branagh, Simon Callow and Imelda Staunton will read from contemporary accounts of the disaster.

At the cathedral, the performance of composer Philip Hammond's "The Requiem for the Lost Souls of the Titanic" will be followed by a torch-lit procession to the Titanic Memorial in the grounds of Belfast city hall.

In the ship's departure port of Southampton, an orchestra will play composer Gavin Bryars' work "The Sinking of the Titanic," and a commemoration is planned in Halifax, Nova Scotia, where more than 100 victims of the tragedy are buried.

The most famous maritime disaster in history is being marked around the world, even in places without direct links to it.

Venues in Las Vegas, San Diego, Houston and even Singapore are hosting Titanic exhibitions that include artifacts recovered from the site of the wreck. Among them: bottles of perfume, porcelain dishes, even a 17-foot piece of hull.

The centenary of the disaster has been marked with a global outpouring of commemoration and commerce. Events have ranged from the opening of a glossy new tourist attraction telling the ship's story in Belfast to a 3-D rerelease of James Cameron's 1997 romantic weepie "Titanic," which awakened a new generation's interest in the disaster.