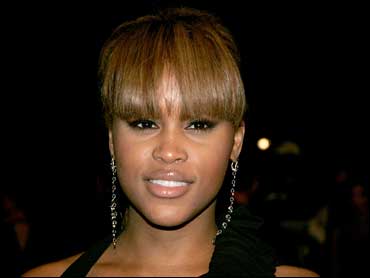 Rapper and actress Eve gave a sneak peak of her upcoming album, "Here I Am," to press gathered at the Geffen Records offices in New York Thursday.

The album, her fourth, is due out on August 7th and will most likely contain 14 songs, although the final track list has not been confirmed.

Looking very casual in a print top, jeans and a white cap, the 28-year-old rapper helmed the stereo system as she answered questions from reporters about the five tracks she shared.

She skipped past the first track, "Tambourine," which was released three weeks ago as the album's first single. It's making a slow but steady climb up the Billboard R&B/Hip Hop charts, currently positioned at No. 52.

The first song she played was "Cash Flow" featuring TI, but it turns out that track wasn't particularly new either. "It was leaked last year as a teaser," said Eve, "but we're going to leave it on the album."

The next song, "Get That Money," starts out like a child's playground rhyme featuring the 12-year-old daughter of a friend of the track's producer, Swizz Beatz. Eve raps about the struggles of her family to make ends meet — "grandma going to work, back hurt, cleanin' dirt" — and her resolve to make a better life for herself.

Eve said that her favorite song on the album is the irresistible party song "Give It to Me," which will most likely be the album's second single. The track, also produced by Swizz Beatz, features Sean Paul's dance hall reggae blended with flamenco guitar.
She also shared "Turn Me On" which features reggae superstar Sizzla Kalonji. Eve said that she loves reggae, and that's why she has three songs influenced by the genre on her album.

Pharrell produced "All Night Long," which might be the third single, according to Eve. It's somewhat of a departure for her because she sings rather than raps on the entire song.

"Here I Am" will be Eve's first solo album since 2002's "Eve-olution." That album debuted at No. 6 on The Billboard 200 albums chart according to Nielsen SoundScan, and has failed to reach platinum status.

The video for "Tambourine," directed by Melina, is scheduled to debut at the end of the month. Melina's recent work includes, Ludacris' "Money Maker," Ne-Yo's "Because of You" and four videos on Beyonce's "B'Day" DVD, including "Upgrade U" with Jay-Z.

Eve will have to take a break from promoting the new album on May 17, when she'll be in a Los Angeles court for her arraignment on DUI charges. The charges stem from an April 26 arrest after her Maserati struck a raised concrete center median on Hollywood Boulevard. She faces a maximum penalty of six months in jail and a $1,000 fine, according to the Associated Press.